Get latest articles and stories on World at LatestLY. Health emergency operation center and control room under the directorate general of health services in Bangladesh stated that as many as 102 people in the country died from May 17 to July 3 in the worst floods that struck the country in 122 years. 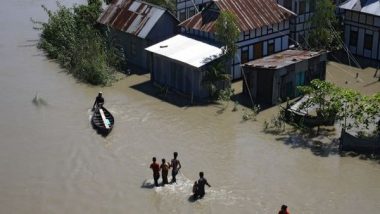 Dhaka [Bangladesh], July 3 (ANI): Health emergency operation center and control room under the directorate general of health services in Bangladesh stated that as many as 102 people in the country died from May 17 to July 3 in the worst floods that struck the country in 122 years.

The Bangladesh Directorate General of Health Services (DGHS) said that all the deceased died by drowning. Among the total deceased, 75 people died by drowning in floodwater, 15 from lightning strikes, two from snake bites, one from diarrhoea, and nine due to other reasons.

In an effort to help the distressed, flood-struck families of Sylhet, employees of Energypac Power Generation Ltd (EPGL) have extended a hand of support by distributing relief among victims on Saturday, reported Dhaka Tribune.

Floods have so far caused widespread damage to habitation, crops, roads and highways across vast swathes of the country.

Earlier, Bangladeshi State Minister for Disaster Management and Relief Md Enamur Rahman had said that both the government and private agencies of the country are working together in the Sylhet region which has been facing the worst floods in 122 years.

An international relief agency on Tuesday said that an estimated 7.2 million people have been affected and remained in desperate need of shelter and emergency relief items in northeastern Bangladesh.

According to the International Federation of Red Cross and Red Crescent Societies (IFRC), from early in the month of June, torrential rain and upstream water have completely submerged around 94 per cent of the town of Sunamganj and 84 per cent of Sylhet districts, in northeastern Bangladesh, bordering the Meghalaya state of India.

Parts of Meghalaya have experienced the highest amount of rainfall in decades, which has led to the overflowing of large river systems running between India and Bangladesh and completely swallowing surrounding areas.

"We have never seen this sort of flooding in our living memories in that region. Hundreds of thousands of people took refuge as their houses went underwater and almost all their neighbourhoods were inundated. Large parts of Sunamganj and Sylhet were completely cut off due to severe disruption of road communication and power cuts," Bangladesh Red Crescent Society Secretary General Kazi Shofiqul Azam said in a statement.

"Our volunteer teams were on the ground helping people with much-needed dry foods, cooked food, safe drinking water. Bangladesh Red Crescent has launched a strategy involving USD 10 million to carry out relief and recovery operations in the affected areas," he said further.

While Sylhet and Sunamganj have almost been cut off from other parts of the country, multiple districts nearby including Netrokona, Kishoreganj are also experiencing floods.

IFRC has launched an emergency appeal for CHF 7.5 million (USD 7.8 million) to support the Bangladesh Red Crescent to scale up and expand the reach of its localized response and recovery efforts to prevent and alleviate the suffering of 300,000 people affected by the recent floods.

"Within just a month, Sylhet and Sunamganj have been flooded and the scale of devastation this time is so much more than the previous ones. We are scaling up our operations alongside Bangladesh Red Crescent due the urgency of the situation," IFRC Head of Bangladesh Country Delegation Sanjeev Kafley said in the statement. (ANI)