Yet when Lam had addressed the local press, she seemed no closer to providing clarity on the city's virus policies. Instead, she appeared to have a message for the Chinese officials who recently locked down millions of citizens in neighbouring Shenzhen after discovering hundreds of coronavirus cases there. 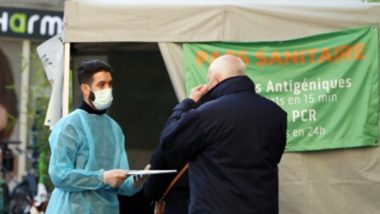 Hong Kong, July 3: Hong Kong on Sunday said that it will distribute around 290,000 sets of COVID-19 rapid antigen test (RAT) kits as part of a follow-up on the recent detection of the COVID-19 virus in sewage samples. The test kits will be distributed to residents, cleaning workers and property management staff working in the areas with positive sewage testing results showing relatively high viral loads in order to help identify infected persons, reported Xinhua.

Hong Kong also urged RAT kit users to report any positive results for COVID-19 via the online platform. On Sunday, Hong Kong registered a total of 1,681 confirmed locally transmitted cases of COVID-19 and 147 imported cases, official data showed, as per the media portal.

Earlier in March with the COVID-19 cases rapidly rising, the Hong Kong administration found itself unable to manage the pandemic with some fearing the government's failure to get the virus under control has accelerated Beijing's creeping authority over the semi-autonomous territory, media reports said. India Reports 16,103 Fresh COVID-19 Cases, 31 Deaths in Past 24 Hours; Active Cases Rise to 1,11,711.

The policy indecision from former Hong Kong's Chief Executive Lam and other officials has appeared to be a reaction to mounting pressure from the mainland. When cases jumped in mid-February and overburdened hospitals began treating patients on gurneys on the sidewalk, Xi Jinping, Chinese President, warned Hong Kong officials to "make controlling the epidemic as soon as possible an overwhelming priority," said a think-tank, Policy Research Group (POREG).

"The whole approach of the government has seemed to be chaotic," said Lau Siu-kai, a Hong Kong scholar who advises Beijing. "You can see all the complaints around Hong Kong these days," he added. "It makes Beijing worried."

Yet when Lam had addressed the local press, she seemed no closer to providing clarity on the city's virus policies. Instead, she appeared to have a message for the Chinese officials who recently locked down millions of citizens in neighbouring Shenzhen after discovering hundreds of coronavirus cases there.

"If you want us to follow what Shenzhen is doing," Lam said, "I'm afraid we are not up to it."Lam had told the media that she would also review many of the city's tough social distancing rules. As she spoke, tall barriers were being erected at public beaches as part of measures she had promised to avoid earlier. Shanghai Disneyland in China Re-Opens Amid Potential COVID-19 Outbreak.

The incompetence displayed by Lam has led to the Chinese mainland authorities extending their foothold in Hong Kong. China has flooded Hong Kong with what it sees as necessary reinforcements, including donations of traditional Chinese medicine and protective medical gear. Chinese epidemiologists were sent to advise health officials, and more than a thousand technicians and health care workers have been dispatched for testing and patient care.

"People like Carrie Lam and other Hong Kong officials are always anticipating Beijing's wishes," Willy Lam, an adjunct professor of politics at the Chinese University of Hong Kong was quoted by a thin tank. "Beijing's imprimatur is now more important than local public opinion for many leading Hong Kong officials," he added.