Lok Sabha Speaker Om Birla on Thursday said that the Russia-Ukraine crisis has adversely affected food and energy security in the world and India firmly believes that such conflicts should be resolved through mutual dialogue and diplomacy. 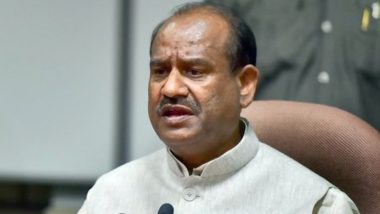 Jakarta, October 6: Lok Sabha Speaker Om Birla on Thursday said that the Russia-Ukraine crisis has adversely affected food and energy security in the world and India firmly believes that such conflicts should be resolved through mutual dialogue and diplomacy.

While addressing Presiding Officers of G-20 Parliaments on the theme "Effective Parliament, Vibrant Democracy" during the 8th Summit of Speakers of G-20 Parliaments (P20) held in Jakarta, the Lok Sabha speaker said that India has always supported a rules-based international order to address the challenges facing the world and find solutions in accordance with the aspirations of people. Cyber Jaagrookta Diwas 2022: UGC Launches Syllabus of Cyber Security Course at UG and PG Level.

"It is in this spirit that India has called for supporting multilateralism for global peace and stability so that we can unite to address the challenges facing the world and find solutions in accordance with the aspirations of the people," Birla added.

Birla said that the global instability caused by COVID-19 had created a food and energy security crisis worldwide. "This has significantly increased concerns regarding food and energy security for developing countries and weaker sections of society," he added. WHO Alert on Gambia Deaths: DCGA Initiates Probe; Haryana Sends Cough Syrup Samples to Kolkata Lab.

The speaker stressed that global problems should be suitably addressed through collective efforts at the global level and our commitment should be to ensure the availability of food and energy resources sustainably at reasonable rates.

While referring to various schemes of the Government for food and energy security, Birla suggested that it is the responsibility of all Parliaments to sensitize their Governments on important global subjects such as food security, energy security, climate change and sustainable development.

He hoped that with the continuous exchange of new ideas, new initiatives, and best practices, "we will be successful in building a better and more resilient economy."

As India is set to chair the G-20, the Lok Sabha speaker further said that India reiterates her commitment to greater solidarity and cooperation among the G-20 countries. Observing that in the changing context, the engagement of the people with democratic institutions has enhanced further through technology, Birla said that India's goal is to connect the youth with Parliament and accordingly various programmes are being organized by the Parliament of India for their active participation.

Birla highlighted that during the glorious journey of 75 years of democracy, India's democracy has become more empowered and vibrant and our Parliament is making continuous and consistent efforts to pave the way for the inclusive social and economic development of the people.

Besides, Birla expressed condolences for the loss of lives during the football match in Jakarta and wished speedy recovery of the persons who have been injured in the incident.

The Lok Sabha Speaker on Wednesday led the Indian Parliamentary Delegation to the Inaugural Session of the Summit. The Session commenced with a video message from the Secretary-General of the United Nations, Antonio Guterres. Indonesian President Joko Widodo, President of the Inter-Parliament Association Duarte Pacheco, Speaker of the House of Representatives of Indonesia Dr. (HC) Puan Maharani and the Speakers of the Parliaments of the G20 Group graced the Inaugural Session.

Birla was welcomed by the Indian Ambassador to Indonesia, Manoj Bharti. Speaker Birla and the Indian parliamentary party welcomed the P-20 summit being held in Indonesia.

During the Summit, Birla held bilateral meetings with Dr (HC) Puan Maharani, Speaker of the House of Representatives of Indonesia and Milton Dick, Speaker of the House of Representatives, Australia and discussed issues of mutual interest. The G20 is made up of 19 countries and the European Union. The 19 countries are Argentina, Australia, Brazil, Canada, China, France, Germany, India, Indonesia, Italy, Japan, Mexico, the Republic of Korea, South Africa, Russia, Saudi Arabia, Turkey, the United Kingdom, and the United States of America.