Issuing a joint press statement after the talks between the two countries during the visit of Prime Minister Narendra Modi, the two countries "reiterated their strong support for a peaceful, secure and stable Afghanistan." 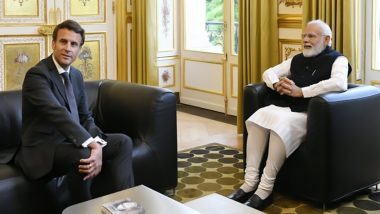 Paris, May 5: India and France on Wednesday expressed serious concern about the humanitarian situation and violation of human rights in Afghanistan while calling for an inclusive and representative government in the country. Issuing a joint press statement after the talks between the two countries during the visit of Prime Minister Narendra Modi, the two countries "reiterated their strong support for a peaceful, secure and stable Afghanistan."

"India and France expressed serious concern on the humanitarian situation and violation of human rights and reiterated strong support for a peaceful, secure and stable Afghanistan, emphasizing respect for its sovereignty, unity and territorial integrity and non-interference in its internal affairs," the joint statement read. "They called for an inclusive and representative government, and respect for the rights of women, children and minorities," the statement added. France Presidential Election 2022 Results: PM Narendra Modi Congratulates Emmanuel Macron on Being Re-Elected as President of France.

Reaffirming the UNSC Resolution 2593, which was adopted in 2021, the two countries also emphasized that there should be "zero tolerance for the use of Afghan territory for spreading terrorism in other parts of the world," while also agreeing to work together in this regard, including at the UN Security Council. The UN resolution 2593 which was adopted by the UN Security Council (UNSC) on August 31, 2021, just days after the Taliban takeover of Kabul, demands that Afghan territory not be used to threaten or attack any other country or to shelter and train terrorists.

Notably, the situation of human rights in Afghanistan has worsened since the collapse of the Afghan government and the Taliban's return to power in August last year. Although the fighting in the country has ended, serious human rights violations continue unabated, especially against women and minorities. Afghanistan is also grappling with a serious humanitarian crisis as according to international assessments,

Afghanistan has now the highest number of people in emergency food insecurity in the world, with more than 23 million in need of assistance, and approximately 95 per cent of the population having insufficient food consumption. PM Narendra Modi Upholds Idea of 'Vasudhaiva Kutumbakam', Says 'India Does Not Dream of Its Own Rise at Cost of Others'.

The joint statement came on the final day of the three-day Europe visit of PM Modi, during the course of which the Prime Minister visited Germany and Denmark, before making a brief stopover in Paris. "In sum, it was a short but substantive visit," Foreign Secretary Kwatra said, adding, "for us a path for accelerated progress in the relationship lies ahead of us."

He also informed that Prime Minister Modi has invited President Macron to visit India at the earliest possible oppurtunity. PM Modi emplaned for India after the conclusion of his engagements in Paris on Wednesday (local time).