Get latest articles and stories on World at LatestLY. Pakistan Defence Minister Khawaja Asif on Sunday defended Finance Minister Miftah Ismail's performance and said that his decisions regarding the economy have been endorsed by the whole cabinet. 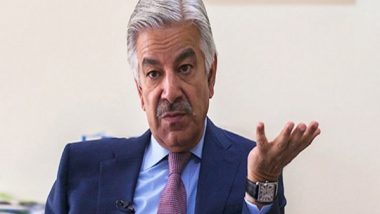 Islamabad [Pakistan], July 4 (ANI): Pakistan Defence Minister Khawaja Asif on Sunday defended Finance Minister Miftah Ismail's performance and said that his decisions regarding the economy have been endorsed by the whole cabinet.

While responding to a question about mounting criticism of Ismail due to the recent fuel hikes in the country, including from within the Pakistan Muslim League-N, Asif said, "Miftah's performance in the last three months and his decisions have been endorsed by the whole cabinet. These are the government's decisions and so we own them."

Asif acknowledged the loss of PML-N's political capital and the risk to its popularity was discussed during PML-N meetings, however, he said that the internal criticism against the Finance Minister did not mean an expression of "no confidence", Dawn newspaper reported.

He further said that such "open criticism" is part of PML-N culture and that should be welcomed.

"I think our Finance Minister, we should support him. He's making decisions with our and the cabinet's approval. He shouldn't be left alone to face the situation," Asif said.

Referring to his tweet from a day ago in Ismail's favour, Asif said he had expressed solidarity with the Finance Minister to avoid the impression that he was making decisions in isolation.

"Miftah's decisions are the party's decisions. We all went to England to take policy direction ... my tweet is clarifying that if Miftah is being blamed [for fuel hike decisions] then [know that] it is the whole government's decision," Asif said.

A day ago, Asif tweeted, "FM Miftah is among the hardest working members of PM's team, accessible to all stakeholders. He is performing v. well under difficult circumstances, with immense criticism from vested interests - including, and unfortunately, from within PMLN. Time to show solidarity with Miftah."

Meanwhile, people within the PML-N party were criticising Ismail over the multiple petrol price hike.

The finance minister is under pressure since the government announced multiple hikes in petroleum products and the delay in the revival of the International Monetary Fund bailout programme, reported Geo News.

"I have support from the federal cabinet and PML-N but there are few party members criticising and opposing me," Miftah said while talking to The Express Tribune, adding that he understands that party leaders were unable to go to their constituencies after the government took some tough decisions to fix economic issues.

Expressing his gratitude to party stalwarts, Miftah revealed that he is under immense pressure because of being the face of the ruling alliance's "unpopular decisions", adding that he did not even want to hold the last press conference where he had to announce the increase in petroleum prices once again.

"I did not want to go for the last press conference, and I had even refused before being persuaded by Prime Minister Shehbaz Sharif," Miftah revealed. "I swear it has never happened that I was unable to find suitable words; I kept thinking what words should I be using to start the press conference."

Along with this, the news of senior leader Ishaq Dar's return to Pakistan has also added fuel to the fire as many believe that Miftah may be shown the door and asked to hand over the reins of the finance ministry to the senator-elect.

The possible changeover, just a few months after the coalition government took office, has left economists and commentators concerned over its possible impact on the economy and the ongoing talks with the IMF.

Asked if he will be willing to leave the finance portfolio for Dar, Miftah said that it is not about his willingness or unwillingness as it is the prime minister's discretion to keep him or anyone else as the country's financial czar, reported The Express Tribune. (ANI)