Get latest articles and stories on World at LatestLY. A French court on Wednesday (local time) found all the defendants in the 2015 Paris terrorist attack case guilty, including Salah Abdeslam, that organized and conducted the attack on the Bataclan theatre in Paris. 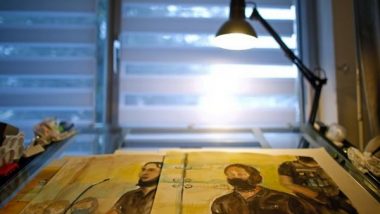 Paris [France], June 30 (ANI): A French court on Wednesday (local time) found all the defendants in the 2015 Paris terrorist attack case guilty, including Salah Abdeslam, that organized and conducted the attack on the Bataclan theatre in Paris.

In addition to Abdeslam, 19 other men accused of playing critical roles in the country's worst peacetime attacks were found guilty "of all charges", reported Euronews.

Only 14 of them have appeared in court, with the other six being tried in absentia.

Abdeslam is the only survivor of the Islamic State (ISIS) terrorist team that organized and conducted the attack and was sentenced to life in prison without parole, reported Euronews.

The life sentence without parole is the heaviest under French penal law, and extremely rare, as most of those given life in prison have the right to an appeal after 18 to 22 years, reported Euronews.

Being found guilty of terrorism resulting in death can raise the safety period to 30 years or no parole, however.

Mohamed Abrini was given life in prison with a possibility of parole after 22 years behind bars, with the court stating it established "his allegiance" to the so-called Islamic State.

During the trial, Abrini explained how he was supposed to take part in the attack but ended up backing out.

Mohamed Bakkali, Osama Krayem, Sofien Ayari and Ahmed Dahmani were all sentenced to 30 years in prison, with a minimum of two-thirds served.

Bakkali, who was said to have played a "fundamental role" in the attacks, purchased rifles and hired safe houses and getaway cars, the court said.

He is already serving a 25-year prison term in Belgium for a failed attack on a Thalys train bound to Paris.

Krayem, a Swedish citizen, had spent some time in Syria fighting for the so-called Islamic State. His DNA was found in apartments used by the Paris attackers, and he is believed to have participated in the 2016 Brussels airport attack.

Ayari, a Tunisian national who also travelled to Syria to join IS, was arrested together with Abdeslam in Brussels in March 2016. Together with Krayem, the two are alleged to have been plotting an attack against Amsterdam's Schipol airport.

Dahmani, who is serving a different sentence in Turkey, provided logistical help to Abdeslam, the court stated.

The rest were given between two and 22 years in prison for a slew of charges ranging from participating in the planning and helping to acquire weapons or make suicide vests to providing logistical support before and after the attacks, reported Euronews.

On November 13, 2015, three suicide bombers struck outside Stade de France in Saint-Denis north of Paris during a busy football game.

In a simultaneous attack, a squad including another suicide bomber began indiscriminately shooting at people at cafes and restaurants in central Paris, and another terrorist group carried out a mass shooting and took hostages at a rock concert attended by some 1,500 people.

The attacks left 130 people killed and 350 others injured. ISIS claimed responsibility for the attacks, saying it was retaliation for French airstrikes on ISIS targets in Syria and Iraq. (ANI)