Get latest articles and stories on World at LatestLY. The Taliban declared Islamic State affiliate ISIS-K a 'corrupt sect' and asked Afghans not to have any kind of relationship with them as stated in the resolution issued at the end of the three-day grand assembly of religious scholars and elders on Saturday. 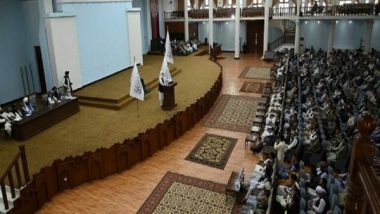 Kabul [Afghanistan], July 3 (ANI): The Taliban declared Islamic State affiliate ISIS-K a 'corrupt sect' and asked Afghans not to have any kind of relationship with them as stated in the resolution issued at the end of the three-day grand assembly of religious scholars and elders on Saturday.

"We call out to the nation that the seditious phenomenon called ISIS-K is void of today's age and a false sect that spreads corruption in our Islamic country. It is forbidden to have any kind of help or relationship with them," the Taliban said in a resolution on Saturday, as quoted by CNN.

The participants also described Daesh or the rival Islamic State outfit as "insurgent, terrorist", noting cooperation with the group is against Islamic laws. The resolution said any armed opposition against the Islamic establishment is a breach of Islamic laws and regarded as rebellion.

"Afghanistan follows an Islamic system of rule and armed opposition to this system is considered rebellion and corruption. Any kind of opposition to this Islamic ruling system, which is in conflict with Islamic Sharia and national interests, is corruption and illegal action," it added.

ISIS-K (the k stands for Khorasan, the name of a historical region that covered parts of modern Afghanistan and Pakistan) has been operating in Afghanistan for the last few years.

It is a branch of ISIS -- the Islamic State of Iraq and Syria. Since its formation in 2015, the terrorist outfit has carried out numerous attacks on Afghan civilians and is held responsible for thousands of deaths, CNN reported citing the Wilson Center, a non-partisan policy forum.

Meanwhile, the three-day gathering which opened on Thursday and concluded on Saturday was the first nationwide gathering of Islamic clerics in the country held eleven months after the re-establishment of the Taliban in the country.

Around 3,500 religious scholars and elders from across the country were invited to attend the three-day Jirga. However, women were not allowed to attend the assembly by the Taliban.

Participants of the jirga were expected to discuss a series of issues including reopening schools for girls from grade 7th to grade 12th, the type of government, the national flag, and the national anthem, but the three days long Jirga concluded without hinting at reopening schools for girls above grade six and women's right to work outside home. (ANI)