US Hopes India Will Support America if Russia Attacks Ukraine

The US has hoped that India, which is committed to a rules-based international order, will stand by its side in case of a Russian invasion of Ukraine, which as per the Biden administration seems imminent with Moscow adding 7,000 troops to Ukraine's border in recent days. 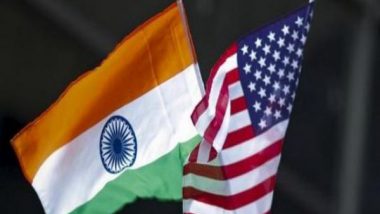 Washington, February 17: The US has hoped that India, which is committed to a rules-based international order, will stand by its side in case of a Russian invasion of Ukraine, which as per the Biden administration seems imminent with Moscow adding 7,000 troops to Ukraine's border in recent days.

State Department Spokesperson Ned Price said on Wednesday that there was a discussion on Russia and Ukraine during the recently concluded Quad ministerial in Melbourne that included foreign ministers from Australia, India, Japan and the United States. Gold, Crude Oil Prices Hit by Russia-Ukraine Crisis; Oil Rates Highest in Seven Years.

He said there was a “strong consensus” in that meeting that there needs to be a diplomatic and peaceful resolution to the Ukraine crisis.

“One of the core tenants of the Quad is to reinforce the rules-based international order. And that is a rules-based order that applies equally in the Indo-Pacific as it does in Europe, as it does anywhere else. We know that our Indian partners are committed to that rules-based international order. There are any number of tenets in that order. One of them is that borders cannot be redrawn by force," Price said in response to a question.

"That, large countries cannot bully small countries. That only the people of a particular country can be in a position to choose their foreign policy, their partnerships, their alliances, their associations. Those are principles that apply equally in the Indo-Pacific as they do in Europe," he said in an apparent reference to the aggressive behaviour by China against its neighbours, including India.

India, the US and several other world powers have been talking about the need to ensure a free, open and thriving Indo-Pacific in the backdrop of China's rising military manoeuvring in the region.

China claims nearly all of the disputed South China Sea, though Taiwan, the Philippines, Brunei, Malaysia and Vietnam all claim parts of it. Beijing has built artificial islands and military installations in the South China Sea.

Price said Secretary of State, Antony Blinken and External Affairs Minister S Jaishankar discussed defence issues, but refrained from commenting if there was any discussion on potential actions under the Countering America's Adversaries Through Sanctions Act (CAATSA). Enacted by the US Congress in 2017, CAATSA provides for punitive actions against any country engaged in transactions with Russian defence and intelligence sectors.

"There was a discussion of our broad defence relationship, but I wouldn't want to characterise it beyond that," Price said. In October 2018, India had signed a USD 5 billion deal with Russia to buy five units of the S-400 air defence missile systems, despite a warning from the Trump administration that going ahead with the contract may invite US sanctions.

India made the first tranche of payment of around USD 800 million to Russia for the missile systems in 2019. The S-400 is known as Russia's most advanced long-range surface-to-air missile defence system.

Earlier in the day, Secretary of State Blinken said that the US was doing everything it possibly can to seek a peaceful resolution to the crisis Moscow has "needlessly precipitated". "But those efforts, as we've said, will be effective only if the Russian Federation is willing to de-escalate," Price told reporters.

According to a senior US administration official, the West detected that Russia had increased its force near Ukraine border by 7,000 troops, with some arriving as recently as Wednesday, contrary to Moscow's claims of withdrawal.

"To be very, very clear, we have not seen that. In fact, we have seen the opposite in recent weeks and even in recent days. More Russian forces, not fewer, are at the border and they are moving concerningly into fighting positions. This is cause for profound concern. At the same time, and as we've warned previously, over the past several weeks we've also seen Russian officials and Russian media plant numerous stories in the press," Price said.

The state department spokesperson alleged that any one of these could be elevated to serve as a pretext for an invasion.

"This could happen, we are concerned, at any time and the world should be ready for it. It could involve claims about Ukrainian military activity in the Donbas, false claims of US or NATO activities on land at sea or air, even claims of Ukrainian or NATO incursions into Russian territory," he said.

"We are particularly concerned about President (Vladimir) Putin and other Russian officials, their ongoing mentions of 'genocide' in Donbas. There is no basis of truth to any of these allegations.

"This, however, has not stopped the Russians from advancing these false claims to include reports of unmarked mass graves of civilians allegedly killed by Ukrainian armed forces and statements that the United States or Ukraine are developing biological or chemical weapons, the latter for use in the Russian controlled territories," he said.

The Kremlin has repeatedly denied it has plans to attack Ukraine but demanded that NATO never admit Ukraine and other ex-Soviet nations as members and the military alliance roll back troop deployments in former Soviet bloc nations.