Choudhary has made a mark in people's hearts with his role as Lord Ram in the 'Ramayan television series. He narrates the story of Lord Ram and Hanuman via a video to explain the significance of the Ayodhya temple and its relevance. 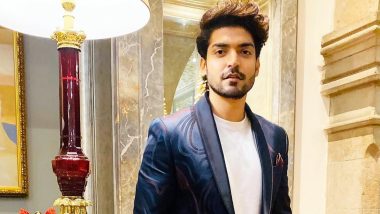 Gurmeet Chaudhary sent out a call to fans to contribute for the Lord Ram temple being built in Ayodhya (Image Credit: Facebook)

After Akshay Kumar requested his fans to come forward and contribute to Ram Mandir's funding by telling a short mythological tale of a squirrel who gave its best in its capacity, now television actor Gurmeet Chaudhary appeals to his fans for the same cause.  Choudhary has made a mark in people's hearts  with his role as Lord Ram in the Ramayana TV series. He narrates the story of Lord Ram and Hanuman via a video and explained the significance of the Ayodhya temple and its relevance.

"I have reached where I am today all thanks to Shri Ram since it was my debut and I got the fortunate chance of essaying his role. With the Ayodhya Temple funding initiative, we have all got a chance to gain Lord Ram's blessings by contributing to its construction. I plan on visiting the site soon as well" said Gurmeet. Gurmeet Choudhary and Wife Debina Bonnerjee Donated Plasma for the Treatment of COVID-19 Patients

In August 2020, Prime Minister Narendra Modi laid the foundation stone for the construction of the temple in Ayodhya. The Supreme Court of India in November 2019 had brought the curtains down on the long-standing religious controversy over the disputed site, concluding that it belonged to Lord Ram. The Supreme Court also ordered the central government to set up a trust to manage as well as to oversee the construction of Ram Mandir.

It is pertinent to note that the five-judge constitution bench had ruled that the said site in the same holy town will be allotted for a new mosque, in place of the one demolished by Hindu activists in 1992.

(The above story first appeared on LatestLY on Jan 18, 2021 07:44 PM IST. For more news and updates on politics, world, sports, entertainment and lifestyle, log on to our website latestly.com).