Amitabh Bachchan Thinking About Retirement, Says His Body Is Giving Him Message

Amitabh Bachchan is not just an actor but an institution in himself. He has been entertaining us for five decades now. Now, Big B is thinking about retiring. The actor expressed his thoughts on his blog, which is adored by millions of fans. 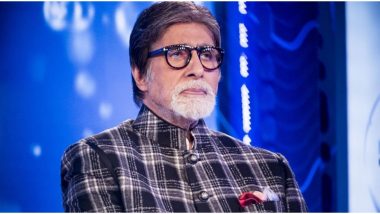 Amitabh Bachchan is not just an actor but an institution in himself. He has been entertaining us for five decades now. But as he is entering the sixth decade in this industry, there are thoughts on his mind that many of his fans would have to accept with a heavy heart. Big B is thinking about retiring. The actor expressed his thoughts on his blog, which is adored by millions of fans. The actor travelled to Manali, to join Ranbir Kapoor and Alia Bhatt, to shoot for the upcoming film Brahmastra. The cast and crew have previously travelled to Bulgaria for a shoot. But his particular travel to Manali have Big B a new insight. Amitabh Bachchan on His Paa Director R Balki: ‘Every Time I Work with Him, He Comes Up with Weird Ideas’.

Amitabh first praised the beauty of the city in Himachal Pradesh. He wrote, "Tranquil .. essence of the freshness .. the winter feel, the purity hopefully of the air .. and a rest after 5am to now .. there is great humility and joy of felicitations en route .. the simplicity of the smaller town reigns supreme .. as does the generous hospitality .. we can never match their honesty and simplicity,”

He further added that staying a new environment required adjustments being made to his room and travelling methods. "I must retire .. the head is thinking something else and the fingers another .. its a message," he added. KBC 11: Amitabh Bachchan to Host Infosys Foundation Chairperson Sudha Murthy in the Show’s Finale.

As per reports, Amitabh will be required to travel to a foreign location with Mouni Roy for Brahmastra in December. If we could have half the energy the actor has at the age of 77, we'd be blessed.

Amitabh is hosting the new season of Kaun Banega Crorepati. He will be next seen in the thriller, Chehre, with Emraan Hashmi. He will also be seen in Gulabo Sitabo with Ayushmann Khurrana. He has also been roped in to play a role in Jhund.

(The above story first appeared on LatestLY on Nov 28, 2019 07:25 PM IST. For more news and updates on politics, world, sports, entertainment and lifestyle, log on to our website latestly.com).