Angad Bedi: Trying to Bring Back Alpha Male With ‘MumBhai’ 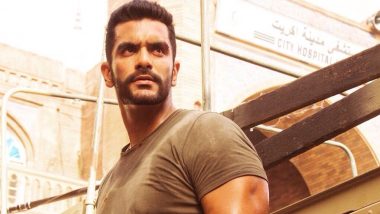 Mumbai, December 10: Actor Angad Bedi is not only aiming to get the look of a police officer right in upcoming series MumBhai, but also trying to bring back the 1990s vibe. The actor says the series will try to bring back the "alpha male" prototype as well. Post Inside Edge season 2, Angad has started shooting for ALTBalaji's MumBhai. The show is based on the friendship between a police officer and a gangster.

"It's not easy to change your body language. I play a fearless cop. It's not just about nailing the look but also (about) bringing back the 1990s vibe back," Angad said. "We are trying to bring back the alpha male. Back in the day, Sanjay (Dutt) sir owned the space along with Jaggu Dada (Jackie Shroff) and Anil (Kapoor) Sir. For me, the essence of the look is in this space. I am learning how to handle the gun, hold it as well understand how the mind of a cop works," he added. Inside Edge 2 Review: Angad Bedi, Richa Chadha, Vivek Oberoi’s Amazon Prime Series Returns in Better Form and Precision.

In Inside Edge, Angad plays ace cricketer Arvind Vashisth. Created by Karan Anshuman, the two-season-old Amazon Prime series, is a gripping thriller that revolves around the drama that goes on behind the scenes of the fictional T20 tournament, Power Play League (PPL), and exposes the nexus between politics, crime, Bollywood, law and order, the business world and cricket at the very top level.

(The above story first appeared on LatestLY on Dec 10, 2019 10:40 PM IST. For more news and updates on politics, world, sports, entertainment and lifestyle, log on to our website latestly.com).