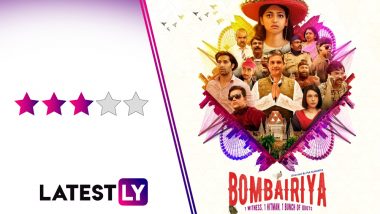 Sometimes, you get to watch a movie with really low expectations and you come out completely surprised. In a good way. Last year, it was Excel Entertainment's 3 Storeys for me. This year, the die fell on Bombairiya. Directed by Pia Sukanya, Bombairiya is led by the omnipresent Radhika Apte (why should Netflix make all the jokes?) along with an ensemble cast in Akshay Oberoi, Siddhanth Kapoor, Shilpa Shukla, Amit Sial, Adil Hussain and Ravi Kishan. Two years in the making, the film finally gets to see that day of light. Radhika Apte Vs Rakul Preet Singh – Who Slayed Better in Black Moschino Leather Dress as a Cover Girl? (See Pics).

With events happening in a day's time, Bombairiya gives you a peek into the lives of several individuals in Mumbai, many of whom have never met each other before, but are about to do so that day. At the beginning of the film, an underground encounter specialist D'Mello (Amit Sial) shooting down what we perceive is an aged terrorist right after the old man sends a mysterious package to someone. We learn that the cop is taking orders from an incarcerated politician Panday (Adil Hussain), who is seeking a star witness hidden by the police and whose confession would keep him in jail for the rest of his life.

In another part of the city, Meghna (Radhika Apte), a hassled PR executive for a philandering superstar (Ravi Kishan), gets into a roadside scuffle with a delivery man (Siddhanth Kapoor), and another bypasser Pintu (Akshay Oberoi), who has a strange obsession with fedoras, gets involved. When Meghna tries to record the fracas with her phone, the man hits Pintu and runs away on his scooty, along with her cellphone. The phone has an intimate video of hers that, if leaked, could create a huge scandal. In trying to get her mobile back, Meghna gets dragged into terrorism conspiracies, a matchmaking ritual and above all, a bid to save a human life.

Bombairiya is like a game of puzzle, with many of the pieces scattered away, some so far that they take time to fit in. In the beginning, it is really difficult to track what's happening and who's who, and why someone is behaving so erratically. There is so much chaos in the proceedings that it may even put you off, while at the same time, also draws you in, as you search for the meaning of it all. A sentiment anyone living in the city could easily relate to, as everyone is searching for something in this big chaos called Mumbai. Radhika Apte Talks About Showdown With a Big Superstar Who Spanked Women on Sets.

Okay, I will scale down the philosophy now. Coming back to the film, you are sure to be clueless to what's happening in the first 20 minutes or so (a trait that Bombairiya loves to enjoy even ahead of the narrative), as new characters and subplots join in at random moments. And then suddenly, the pieces slowly fit into each other, things become clearer as to what exactly are each of them is running after. Yet, Sukanya never lets go of the frenetic pace that the narrative is on, occasionally taking a pause to give some really amusing, yet thoughtful sequences.

A matchmaking session at a cafe turns out to be a hilarious showdown of mistaken perceptions. So is that awkward car-ride that follows with a truly interesting take on a popular mythology and ends in a bhajan. For when we make up our own mess, it's only God who can save us, right?

There are times when the movie takes digs at how the city functions, like that scene where Meghna frustratedly asks a rickshaw driver, who refused her fare, to take her where he wants. Or those two constables stuck with an illegal police chowki that they can't even get into.

My favourite scene involves the above two cops sitting in a police commissioner's office and observing how the portraits of Mahatma Gandhi and Subhash Chandra Bose look in the same direction, despite having different ideologies. And we realise that one of the constables holds a lathi, while another has a gun that he never could fire. Some really witty paralleling here, and we have to credit the writer, Michael E Ward (also the producer) for that! There are some heavy influences of the works of the Coen Brothers, Quentin Tarantino, Guy Ritchie in the writing. #MeToo in Bollywood: Any Kind of Abuse Must Not be Exercised or Tolerated, Says Radhika Apte.

Then things once again move fast. Bombairiya's insistence that the frenetic pace is to be maintained is intriguing, and it hopes that the viewers catch up to the speed of what's happening. To be honest, at one point in time, even I lost the thread of what's going on. In the process some of the character development also gets lost, though I think, that was never in the agenda of the makers.

The puzzle pieces finally fit in together in that chaotic finale that manages to be amusing and thrilling. However, the way things are tied up together doesn't exactly bring a proper satisfaction, which you can portion some blame towards how the film behaved before. And yet, the disappointment doesn't get hung up over you, as Bombairiya meshes in the message of the film smoothly - that it is high time we need to bring the Witness Protection Program in India.

Watch The Trailer of Bombairiya Here -

Each of the actors in the cast, even those who have bit roles, deliver exactly what we expect from them. Leading them is the ever dependable Radhika Apte. Even though she never deliberately lets us into the psyche of her character, Radhika manages to let us feel her tumultuous state of mind. She truly excels in the scene where she talks about cleansing her past sins by burning them in the fire. Akshay Oberoi, charming as always, proves again why he is such an underrated actor deserving of more such better roles. He totally encapsulates the spirit of a man-child who refuses to let go of superhero dreams. Let's hope he doesn't get to watch Glass. Glass Movie Review: James McAvoy Is Easily the Best Thing About M Night Shyamalan’s ‘Unbreakable’ Franchise Capper.

Siddhanth Kapoor is a revelation here, even though it is hard to figure out what exactly his character motivations are here. Even though he starts off as an annoying figure, Siddhanth manages to make his character a reluctant hero to root for, with an empathetic performance. A reliable Amit Sial, who was so brilliant in Raazi, continues his fine form here. Ravi Kishan, in a brief role, provides some genuine laughs. Adil Hussain, Shilpa Shukla, Ajinkya Deo, Denzil Smith and the actors who play Pintu's parents and his brother-in-law are all too good.

- The Chaotic Pace is Difficult To Grasp At Times

- Some Character Development is Lost

Bombairiya skids through several potholes in its pace to make a compelling black comedy. Once you get a taste for that disorganised narrative, there is no stopping the thrills and laughs that you can enjoy in this chaotic fun ride.

(The above story first appeared on LatestLY on Jan 16, 2019 10:05 AM IST. For more news and updates on politics, world, sports, entertainment and lifestyle, log on to our website latestly.com).