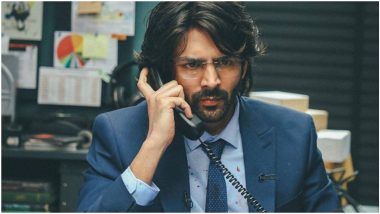 Dhamaka is the official remake of the 2013 Korean thriller The Terror Live!. Directed by Ram Madhvani of Neerja fame, the movie has Kartik Aaryan in the lead, playing a former topshot news channel anchor now demoted as an RJ for the same network. Things take a drastic turn when during his radio show, Arjun gets a call from 'Raghubeer Mhata' who claims he is a labourer. He claims that he will blast the Bandra Sealink, if he is not taken seriously. Which he does. Arjun, instead of reporting to the cops about the call, uses it to get back into the newsroom trying to secure his old post back. Only things don't really go as per his plan. The caller seems to know every move of his, and had even planted a bomb in his earpiece to keep him within the line. The terrorist only wants the minister to apologise for the deaths of three labourers who were killed during the restoration work of the Sealink a few years back. Does he get it or not, or how Arjun manages to get out of his sticky situation (or not) is what the rest of the film is about. HUGE SPOILERS AHEAD! Dhamaka Movie Review: Kartik Aaryan's Strong Act Carries This Not-Enough Explosive Remake of a Korean Thriller.

Mrunal Thakur plays his ex-wife Saumya, who is an idealistic reporter working for the same channel and covering the blast from Sealink. There is Amruta Subhash who plays Ankita, the news channel head, who cares more about the soaring TRPs than helping in neutralising the threat.

So does Arjun Pathak manages to catch the caller with the help of the cops? Or does he become a pawn in the great media circus? Read ahead to find out, as we decode the climax of Dhamaka.

As it turns out, the real Raghubeer Mhata is dead, being one of the three killed labourers. It is his son, Anand, an engineer who was working in the IT department of Arjun's news channel, who was masquerading as his dead father for that one apology. By the time Arjun figures it out, it is too late for both of them. Even though Raghubeer's son didn't want to cause any harm to innocent lives, his actions killed innocent people on the Sealink, including Saumya. Moreover, he also lead the police team trying to arrest him in the adjoining building to their deaths, by blasting the structure, which also damages the building where the news channel is located.

As rest of the news team runs away, Arjun, who now lost his credibility (the scandal that resulted in his title loss gets exposed) and his wife, stays back and realises the identity of the caller. He tricks him to exposing his identity on somehow still functioning broadcast. The man evokes Arjun's sympathy by revealing why he did what he did, but he is killed by a sniper shot.

But the tragedy doesn't end here for Arjun. He finds out that in trying to save the face of the channel, Ankita created a fake conspiracy angle between him and the dead man, claiming it was all their ploy, and sold it to the rivals. So now Arjun becomes the hunted one, and realises that there is no escape for him now. With his wife also dead, Arjun takes a last stand. As Mhata has already rigged the building with bomb before getting killed, Arjun uses the detonator to blast the building, taking down the very establishment that made him and then broke him. The final scene has the camera focus on his lost face, as the building crashed and he is presumably killed in the explosion. Dhamaka Movie Review: Kartik Aaryan’s Film Does Not Turn Out To Be As ‘Explosive’ As Expected, Say Critics.

It is a tragic ending for Arjun, though it is a fate he had written for himself, the moment he decided to not go to the cops when the caller's threat was first verified. His brash desire to take back his old job, and hopefully his ex-wife back, is the main reason for his downfall, and that Saumya, the only good person in this whole equation, also loses her life in the process. Arjun was never a good man to begin with; on his channel's behest, he never did the story on the death of the labourers, thus making him also a party to the crime. It is only when he realises that he is merely a pawn for his channel's TRP seeking antics, and Saumya's resultant death, that makes him somewhat repent his actions, by which it is too late for him.

It is also interesting to note here that many of the casualties could have been avoided if the minister has offered an apology - though that doesn't neutralise the caller's actions - reminding how in the history of this country's politics, no politician has publicly apologised for how they ruined this country from corruption to bad economy decision to basic apathy towards human rights. Only if Anand Mhata realised this truth, he would never have done what he did. Unless of course, he had targeted those who were directly involved in the coverup, rather than destroying innocent lives.

(The above story first appeared on LatestLY on Nov 19, 2021 09:43 PM IST. For more news and updates on politics, world, sports, entertainment and lifestyle, log on to our website latestly.com).