There are times when for some reason, the composers lift tunes of some very iconic international tracks that are already popular in India. Reckless plagiarism or being plain lazy? You decide after listening to these 10 tracks and their shameless ripoffs! 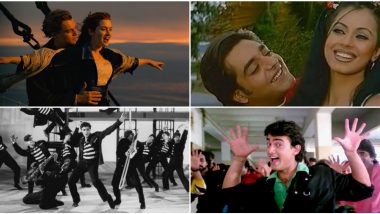 From Elvis Presley’s Jailhouse Rock to Celine Dion’s Titanic Track, 10 Iconic International Hits Bollywood Had the Audacity to Rip Off!

In the recently-released Kaamyaab, there is a poignant scene where Sanjay Mishra's character reminisces how his dead wife used to love the song "Jab Koi Baat Bigad Jaye" from the film Jurm, and how heartbroken she was when she learnt it was inspired by an English song, "A Hundred Miles". Isn't that our very own experience when we learn that a Hindi song that we have cherished for years turn out to be not so original? UK PM Boris Johnson Faces Plagiarism Claims After Copying ‘Love Actually’ Spoof for Election Campaign (Watch Video).

There are countless examples of songs that has looked beyond borders for inspirations, right from the time of OP Nayyar, to RD Burman to Anu Malik, Rajesh Roshan (he composed Jurm's music BTW), Jatin-Lalit to Pritam. Most of the times, we learn about the original takes of the song much later, though in this YouTube era, it is pretty easier to catch plagiarism.

But there are times when for some reason, the composers lift tunes of some very iconic international tracks that are already popular in India. Reckless plagiarism or being plain lazy? You decide after listening to these 10 tracks and their shameless ripoffs!

My Heart Will Go On

Who doesn't know this immensely popular song from the soundtrack of James Cameron's Titanic? As the movie became a huge hit in India, so did its theme music and the accompanying song, recorded by Celine Dion.

So it takes some special guts to rip off this track, when the original was already a big musical hit in India. And the special guts was possessed by none other than Hrithik's uncle, Rajesh Roshan. Just sample the music in first stanza of the song "Chehra Tera Chehra" from the film Daag - The Fire.

So, are you done slamming your head in exasperation? Wait! There is more, and Mr Roshan is returning soon in this list!

One of the King, Elvis Presley's most famous tracks is "Jailhouse Rock". You might have sampled the song in some Hollywood movie or show or another, but there is little chance that you could not have missed the song...

... and neither have the composers in Bollywood, as "Jailhouse Rock" has inspired a couple of Hindi songs. The most famous one is "Khambe Jaisi Khadi Hai" from Aamir Khan and Madhuri Dixit-starrer Dil.

Dil already has another plagiarised song in "Mujhe Neend Na Aaye" which was lifted off a UK-based band Aalaap's "Chunni Udd Udd Jaaye".

Another track that finds some similarity with "Jailhouse Rock" is "Laal Chunariya Wali Pe Dil Aaya Re" from Jodi No 1, picturised on Govinda and Twinkle Khanna. The beats are very desi, but you cannot ignore the phoren connection.

Interestingly, Dharma Productions officially remade the song for their film, We Are Family, starring Kajol, Kareena Kapoor and Arjun Rampal.

The funny part is that the movie itself is a remake of the Hollywood film, Stepmom. But everything is official here, unlike most of the entries in this list.

Now who hasn't heard of this beautiful, inspiring instrumental music scored by Vangelis for the sports drama, Chariots of Fire?

Rajesh Roshan heard it too, and he audaciously rips it off for this famous track, "Main Teri Hoon Jaanam" from Khoon Bhari Maang, directed by his brother, Rakesh Roshan.

Rajesh Roshan seems to be a huge Vangelis fans, as he has sampled couple of their tracks in Koyla and Kaho Na... Pyaar Hai.

We Will Rock You

Just how iconic is this anthem given to us by the legendary British group, Queen!

But it hardly matters to Bollywood, as the song was recreated to be the intro song for an evil Akshay Kumar in Guddu Dhanoa's Aflatoon.

As per Wikipedia, Aflatoon composer S Bhattacharya is said to have bought the rights to remake the original track. But since there is no verifiable reports confirming this, we have to take this piece of info with a pinch of salt.

Every '90s kid would remember the group Aqua and their most famous track, "Barbie Girl".

But despite the popularity of the track in India, Rajesh Roshan (oh man!) deemed it fit to remake the song for Laawaris as "Tumne Jo Kaha", featuring Akshaye Khanna and Manisha Koirala.

At least, he could have made sure that the song doesn't sound so obviously copied. Alas...

This Spanish dance song by Los del Río was a huge global hit, including in India.

"Macarena" was so popular that Kamal Haasan paid a funny ode to the song in his film, Chachi 420.

But it is not Chachi 420 song we are talking here. Anu Malik, (finally making an entry here) recreated the song, not once... but twice!

The first time was as "Dil Le Le Lena" in Salman Khan-starrer Auzaar...

... and the second time was as "Dil Maaka Dina" in the Suniel Shetty-starrer, Dhaal.

Wonder, what's it about the song that made Anu saheb remake the same track twice!

Every Enrique Iglesias fan would swear by "Bailamos", one of his biggest hits.

Unfortunately, for all the desi EG fans out there, the track got an inferior version in Govinda and Preity Zinta's Khullam Khulla Pyaar Karen.

(In case you are not able to watch the video above, please click here)

Who's the culprit this time? Anand-Milind!

The late George Michael will always be remembered for giving us one of the most romantic Christmas songs.

And it inspired this beautiful, and forlorn track in Aamir Khan's Akele Hum Akele Tum (that itself had ripped off Kramer vs Kramer).

"Dil Mera Churaya Kyun" is not the only song copied in the film. "Raja Ko Rani Se Pyar Ho Gaya" takes the tune out of The Godfather's theme music. "Aisa Zakham Diya Hai" samples Deep Purple's "Child In Time". And the funny part is that in the film, Aamir plays a composer who hates plagiarism!

The track was not only a huge hit from the soundtrack of the 1992 animated film Aladdin, but also, in its live-action 2019 reprise.

But did you know this song inspired a romantic track in Dhoondte Reh Jaoge, that was composed by Jatin-Lalit?

If you haven't heard of this 1998 film, it was the Bollywood launchpad of Amar Upadhyay and Antara Mali.

Mungo Jerry's "In The Summertime" is the kind of song that will cheery you up anytime you hear it, doing that job since the '70s!

But that's not the feeling we get when we hear its ripped-off take in "Haseena Gori Gori" from Tarazu, featured on Akshay Kumar and Sonali Bendre, with no change in the beats!

And in case, you are wondering who the plagiarism maestro is, no guesses there! Rajesh Roshan strikes again!

Listen to this song from Vidhu Vinod Chopra's Kareeb, and guess where its composer Anu Malik found his inspiration?

Yes, you heard it right! Even the "Happy Birthday to You" tune isn't spared!

(The above story first appeared on LatestLY on Apr 27, 2020 03:32 PM IST. For more news and updates on politics, world, sports, entertainment and lifestyle, log on to our website latestly.com).