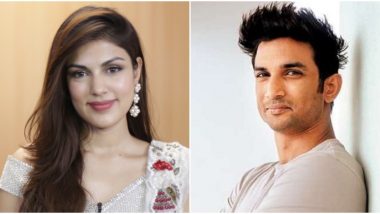 The Bihar government in an affidavit informed the Supreme Court on Friday it has jurisdiction to file FIR in the death of Sushant Singh Rajput case and the actor's then girlfriend and now prime accused Rhea Chakraborty came in contact with the late actor only to grab his wealth. "She over-dosed him with drugs and then spread the word that he was mentally ill", said the affidavit filed by the Bihar government, as it cited Sushant's father's complaint and opposed Rhea Chakraborty's plea in the Supreme Court that sought transfer of the case from Patna to Mumbai. Sushant Singh Rajput Case: Bihar Government Calls Rhea Chakraborty’s Transfer Petition ‘Misconceived and Not Maintainable’

"The petitioner (Rhea) and her relative desperately attempting to give impression to the deceased actor that he is suffering from mental illness for which he required treatment. The petitioner also took the deceased to her house where she started giving him overdose of medicines," said the affidavit citing K.K. Singh, Sushant's father. The affidavit said Rhea also took all belongings of Sushant into her possession and made every attempt to keep him away from his family.

"The petitioner also took his bank account details and started using the bank account according to her wishes. The deceased actor wanted to leave the film industry and do organic farming in Coorg, however, the petitioner started blackmailing the deceased actor by saying that she will give his medical report to the media and prove him 'mad' after which he will not get any kind of work," added the affidavit.

"The deceased actor had informed his sister that the petitioner will falsely implicate him, if the deceased did not pay heed to her," the affidavit added. The state government insisted that the Patna police has jurisdiction to register the FIR and the court in Patna has jurisdiction to try the petitioner for the offence as mentioned in the FIR registered with Rajeev Nagar P.S (Patna).

(The above story first appeared on LatestLY on Aug 07, 2020 12:10 PM IST. For more news and updates on politics, world, sports, entertainment and lifestyle, log on to our website latestly.com).