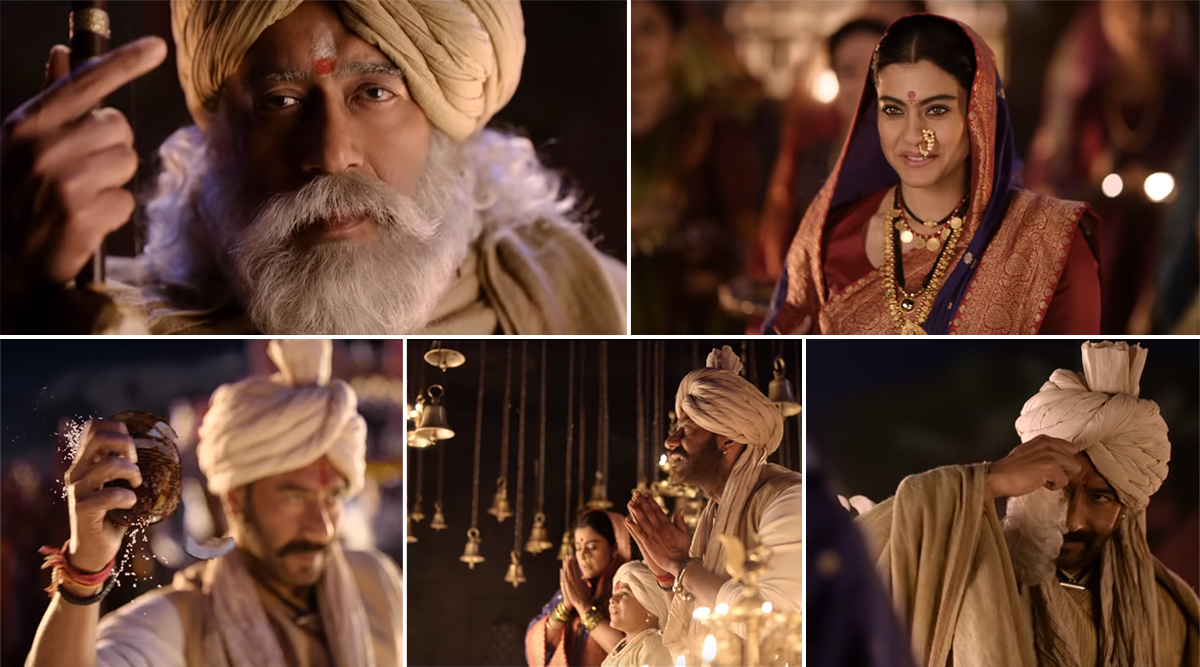 Ajay Devgn and the team of Tanhaji recently released its second song, Maay Bhavani, another powerful track after Shankara Re Shankara. The song revolves around Ajay, Kajol and their son while they are busy celebrating a festival in their village. It's a typical celebratory song but what's stands out the most is Ajay's chemistry with his real and reel wife. It's been a long time since we witnessed their amazing chemistry on the silver screen and Maay Bhavani song once again proves why it would always be evergreen. Tanhaji: The Unsung Warrior: Ajay Devgn Shares Impressive Posters of On-Screen Chhatrapati Shivaji Maharaj, Jijamata and Aurangzeb (View Pics).

The new song is sung by Sukhwinder Singh and Shreya Ghosal and it is composed by Ajay - Atul. With a powerful theme and festive backdrop, it's surely a visual delight and goes in with the movie's mood. Ajay and Kajol are getting ready for their son's marriage when he's assigned the task of securing Kondhana fort. While Chhatrapati Shivaji Maharaj was always against this decision, Tanhaji being a warrior, went ahead to fight his battle. Ajay Devgn-Kajol&#8217;s Tanhaji: The Unsung Warrior's New Promo Is All About Putting Duty Above Relationships (Watch Video).

Check Out the Song Here

Talking about the song, director Om Raut in his interaction with Times of India said, "Marathas are known for their rich culture. Maay Bhavani is a special song where you will see Tanhaji celebrating Shimga, which also marks an important moment in his life.” The movie will hit the screens on January 10, 2020, and clash with Deepika Padukone's Chhapaak.