Eminem Birthday: 5 Incredible Songs That Ruled the Hearts and the Charts 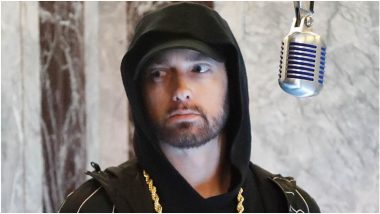 Internationally popular rapper Eminem turns 48 today. The Real Slim Shady has been ruling the charts and the hearts for decades now. The impact is such that Donald Trump's secret service legit stepped at his studio door to ask him what the lyrics of his song "The Ringer" were about. "'Cause Agent Orange just sent the Secret Service/To meet in person to see if I really think of hurtin' him/Or ask if I'm linked to terrorists," Eminem rapped in the song. While he has awards galore, he is one of the artists who have given up on the Grammys. Eminem has sworn that he will never attend the Grammys for they have ignored the hip-hop scene for far too long. Although, he did perform at the Oscars this year. Eminem Reveals the Reason for Showing Up at the Oscars 2020 with a Surprise Performance.

Eminem is one of the rare artists who has dared to say that he is not proud of some of his creations. " There are ups and downs. I haven’t had a perfect career. I’ve put some albums out that, looking back, I’m not super proud of, but there’s also a lot of stuff that I am very proud of," he said in an interview.

So, in Eminem's honour, we are going to look back at some of the numbers that we are incredibly proud of.

The song was on Billboards number 1 in May 2010. The music video has over 1.4 billion views on YouTube.

We started the year 2020 with this epic number. Everything this year was downhill after that.

Love The Way You Lie

Eminem collaborated with Rihanna for this passionate song about love and heartbreak.

This song was a diss track for Machine Gun Kelly after MGK released "Rap Devil" which in turn was a response to the song, "Not Alike".

The fact that Eminem's raps are very personal and relatable, they make for great music. Not to mention how some of the songs penned down by him really piece through the heart. Very happy birthday to the real Slim Shady.

(The above story first appeared on LatestLY on Oct 17, 2020 09:09 AM IST. For more news and updates on politics, world, sports, entertainment and lifestyle, log on to our website latestly.com).