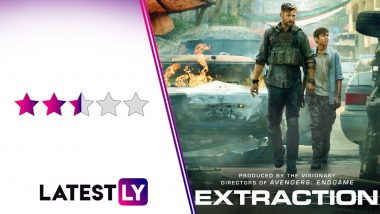 Extraction Movie Review: In Sam Hargrave's Netflix film Extraction, Ovi (Rudraksh Jaiswal), the teenage son of an incarcerated drug lord Mahajan (Pankaj Tripathi) in Mumbai, gets kidnapped by the rival crime lord Amir Asif (Priyanshu Painyuli), based in Dhaka. Mahajan's security chief Saju (Randeep Hooda) is coerced to bring Ovi back safely, and he, in turn, gives the task to an international team of extraction specialists. Their leader, Nik (About Elly's Golshifteh Farahani, looking perpetually as if she is at someone's funeral) assigns mercenary Tyler Rake (Chris Hemsworth) to do the honours of rescuing the boy and bringing him out of Dhaka. Randeep Hooda Hails His Extraction Co-star Chris Hemsworth, Says ‘This Is One of His Best and Finest Performances’.

Tyler goes to Dhaka and rescues Ovi from Asif's henchmen, but Saju's duplicity messes up their extraction. With Asif's men hot on their trail, Tyler has to do everything he can to keep Ovi safe even if it means putting his own life at stake. In the process, he predictably forms a bond with the boy and begins to see this job beyond a money-making opportunity.

Extraction is basically a gripping action thriller whose premise is spurred by the dilemmas of three fathers. There is Mahajan who wants his son back at any cost safe and sound, and he is even willing to harm his own man's kid for that to happen. Saju just wants to keep his family safe at all costs and makes all the wrong decisions in the process, the consequences of which even swallows him. And then there is Tyler, who is haunted by his guilt of being a failure as a father and sees saving Ovi as as opportunity to redeem himself. The moral dilemmas of these characters should have made Extraction even more interesting, if it wasn't overshadowed by the many mindless action sequences. Sicario: Day of the Soldado, this ain't, mate!

TBH, I quite enjoyed the action sequences in the film, till a point came where it began to remind me of Call of Duty: Modern Warfare. Sam Hargrave, who is making his directorial debut with Extraction, had served as a stuntman in Captain America: The Winter Soldier, directed by Russo Brothers (who are involved in Extraction as producers). So it is expected of Hargrave to bring his expertise to his first film as a director and deliver on the action sequences, which he does deftly to most extent. Did You Know Extraction Director Sam Hargrave Was Chris Evans' Stunt Double in Captain America: The Winter Soldier?

There is a gripping chase sequence in the middle of the movie, involving Tyler, Ovi, Saju and some Bangla cops, that has the potential to leave you breathless. An attempt to make it feel like it is shot in a single take, which isn't exactly convincing, but the grittiness of the sequence makes up for it. There is another brief but thrilling action sequence where Tyler takes on a City of God-like gang of street-kids in the employ of Asif, whom the former calls as 'Goonies from Hell'. The congested lanes of the city, which I presume to be Hyderabad more than Dhaka, add more terseness to the sequences. Extraction: Chris Hemsworth Shares a BTS Video Of a Deadly Stunt Shoot, Shows Gratitude for the Stunt Team for Their Incredible Work.

But by the time, the film reaches its climactic confrontation on a bridge, with even Nik and her team getting to do something here, the action loosens its grip and become a bit too mechanical, turning into videogame violence, that is just short of flashing the depleting health bar on the screen. High points for the striking cinematography and the production design, though.

Watch The Trailer of Extraction here:

Yet, the action is the best part of the film, followed by the solid performances of the cast. A morose Hemsworth, still looking nothing short of an Asgardian God, shines in both the action and the drama portions, while Rudraksh Jaiswal is pretty good for his debut. Randeep Hooda, thankfully, isn't just a glorified henchman (as the trailer made me feel so) and has a substantial role in the film, with the actor bringing an sympathetic nuance to a flawed character and also delivering well in the action scenes. Priyanshu Painyuli, who was terrific in the underrated Bhavesh Joshi Superhero, is suitably menacing as the main antagonist.

While the performances are good enough and the action is entertaining (even if it isn't John Wick), what brings Extraction down is the drama in between. The bonding between Tyler and Ovi develops in a rushed and expected pattern, something you have seen in countless movies before. The hero having a dark history is becoming an irritable cliche of its own. Even the introduction of Tyler's ally Gaspar (David Harbour) and the turn this subplot takes annoys you for its sheer lack of deviation. Sadly, Extraction's dependency on these plot points doesn't elevate the film beyond being a just-about decent one-time watch.

I am also pretty sure that the viewers in Bangladesh would not take kindly to the depiction of their country in the film (earlier titled as Dhaka) - like a Mexican lawless land, ruled by a Bangla Pablo Escobar (Nik's words, not mine!).

- The Performances of Hemsworth, Hooda and Jaiswal

For the action-hounds, Extraction has plenty to keep you thrilled even if it suddenly gives you a craving to go for your PS4. For Hemsworth and Hooda fans, the actor are pretty solid in the film, especially in the action scenes. What sucks is Extraction not doing a great job of extracting itself from being yet another standard 'rescue hostage' thriller with a broken leading man. The movie is streaming on Netflix from April 24.

(The above story first appeared on LatestLY on Apr 24, 2020 11:20 AM IST. For more news and updates on politics, world, sports, entertainment and lifestyle, log on to our website latestly.com).