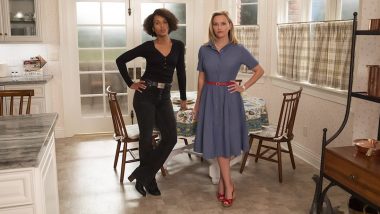 Actresses Reese Witherspoon and Kerry Washington quipped they should "remake" 1995 teen cult movie Clueless after both stars failed auditions for the original. In an interview with Buzzfeed to promote their new series "Little Fires Everywhere", the actresses opened up on their experiences auditioning for the film, which starred Alicia Silverstone as the "Valley girl" Cher Horowitz and Stacey Dash as her accomplice Dionne Davenport, reports aceshowbiz.com. "You know one thing that is public... is I auditioned so hard for 'Clueless' and I didn't get it," said Witherspoon, as Washington admitted: "I did too!" Selena Gomez Recalls Her On-Camera Kiss With Dylan Sprouse, Says ‘It Was One of the Worst Day’

The move-in release date comes as the World Health Organisation (WHO) advises people to practice social distancing and stay home in a bid to prevent the spread of the virus.

(The above story first appeared on LatestLY on Mar 21, 2020 02:12 PM IST. For more news and updates on politics, world, sports, entertainment and lifestyle, log on to our website latestly.com).