Sebastian Stan ended up getting popular due to starring in the Marvel Cinematic Universe as Bucky Barnes and ever since then has just been delivering entertaining films. From portraying Winter Soldier to exploring the highs and lows of the Motley Crue drummer Tommy Lee, the roles have been a knockout. 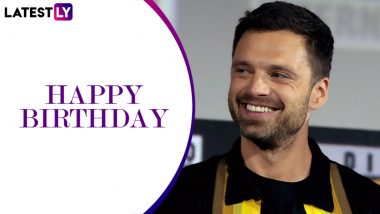 Sebastian Stan over the last few years has grown out of his small shell and turned into perhaps one of the most popular stars working today. A heartthrob and an action star that can also portray some serious personas, Stan’s career has been a roller coaster ride and he has been doing quite well. Being diverse in his portrayal of characters and picking projects that are challenging and providing entertainment with some safe ones as well, he is an interesting persona. Sebastian Stan and Jennifer Aniston Are Chic Stars as They Happily Pose for a Popular Mag (View Pic).

Sebastian Stan ended up getting popular due to starring in the Marvel Cinematic Universe as Bucky Barnes and ever since then has just been delivering entertaining films. From portraying Winter Soldier to exploring the highs and lows of the Motley Crue drummer Tommy Lee, the roles have been a knockout. So, to celebrate this actor’s 40th birthday, lets take a look at five of his best roles.

Lee Bodecker (The Devil All the Time)

The Devil All the Time featured characters that were morally ambiguous and some that were down-right bad. Sebastian’s Lee Bodecker fits into the down-right bad category. Playing the role of a police officer, he was the antagonist of the film and put on a performance that embraced the elements of a dirty cop.

Imagine a guy, who is extremely nice at the start and then you fall in love with him. He takes you to his cabin and it turns out that he is actually a human-meat selling maniac. Can’t? Oh, well, but Sebastian Stan will make you believe that with his performance as Steve in Fresh.

The story of I, Tonya is one of hate, passion and the need to do anything to win. Sebastian Stan plays the role of Jeff Gillooly, Tonya Harding’s husband, and the actor gives a performance the likes of which we haven’t seen from him before at this point.

While the morality of the project’s existence is quite flawed itself, you can’t deny that Stan gave it his all in the role here. Portraying Motley Crue’s loud and brash drummer, Stan embraced the role of Tommy Lee. It’s by far his best work. Pam and Tommy Series Review: Sebastian Stan and Lily James Bring Heart to This Entertaining but Exploitive Show (LatestLY Exclusive).

Sebastian Stan truly is one of the actors to keep a lookout for today, and we can’t wait to see what he has for us in store next. With this, we finish off the list and wish him a very happy birthday.

(The above story first appeared on LatestLY on Aug 13, 2022 10:54 AM IST. For more news and updates on politics, world, sports, entertainment and lifestyle, log on to our website latestly.com).