Radhika stands powerful in a golden blazer with hair pulled back in a sleek bun. Topping the look are the large golden stud earrings. She surely knows how to blend style with substance! 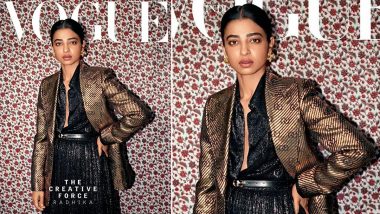 Blame it on her omnipresence (every time you visit OTT, she is there to impress us), Radhika Apte is synonymous with Netflix India. No wonder the caption goes 'The Creative Force' as the talented actress shines beautifully on the cover of Vogue India. She looks every bit a powerhouse as she graces the cover of the leading glossy. Radhika surely knows how to blend style with substance!

Taking to her social media, Radhika shared the cover pic where she looks stunning in a black shimmer dress with a black leather belt around her waist. Adding panache to the already powerful look, Radhika stands strong in a golden blazer with black stripes; hair pulled back in a sleek bun topping the style quotient with large golden stud earrings. A Call to Spy Movie Review: Women Power Rule in Radhika Apte’s WWII Spy Drama (LatestLY Exclusive)

Apte makes for the perfect pick of the season for this edition with her unparalleled contribution to the craft. From ruling the OTT space to making it big with her International film debut-- not to miss those awards coming her way for her directorial debut-- Apte indeed is a powerful force in the creative field. Radhika Apte Speaks on Nepotism, Says 'We Have Supported It a Lot and It’s Not Just the Film Industry'

The multi-talented actress is currently shooting for her upcoming film, Mrs. Undercover after her critically acclaimed releases of 2020 like A Call to Spy and Raat Akeli Hai.

(The above story first appeared on LatestLY on Mar 02, 2021 04:09 PM IST. For more news and updates on politics, world, sports, entertainment and lifestyle, log on to our website latestly.com).