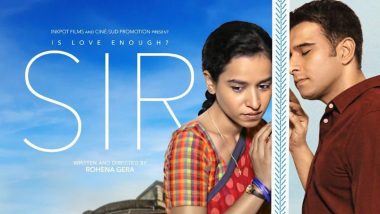 Filmmaker Rohena Gera's award-winning debut feature "Is Love Enough? SIR" is scheduled to release on March 20. Is Love Enough? SIR features actors Tillotama Shome, Vivek Gomber and Marathi actress Geetanjali Kulkarni. The film also had its World Premiere at the 71st International Cannes Film Festival, "The film is about fighting for a dream, and the film has become my dream come true. Les Miserables: Sanjay Suri to Release Ladj Ly’s Oscar-Nominated Political-Drama in India on March 13.

To have my first film in Cannes, and then to have it travel around the world from Brazil to Japan to Hungary to Israel...it's beyond what I would have dared to dream. But that said, I made the film for India. It is an Indian story, it is about us. The fact that people abroad connected to it is a bonus. What I am so excited (and nervous) about is to see how people at home feel," Rohena said. Akshay Kumar to Collaborate with Ekta Kapoor for an Action Comedy, Film to Release in 2021?

Apart from announcing the film's release date, the makers on Thursday unveiled the first look poster of the project too. Produced by Inkpot Films, and co-produced by Cine-Sud Promotion, the film is a story of a Marathi widowed domestic worker played by Tillotama Shome who finds a complicated romantic spark with her recently single employer Ashwin (Vivek Gomber), who's just returned from the U.S. after breaking off his engagement.

(The above story first appeared on LatestLY on Feb 27, 2020 03:45 PM IST. For more news and updates on politics, world, sports, entertainment and lifestyle, log on to our website latestly.com).