D Imman is mainly known for his works in Tamil Cinema. He has collaborated with some of the ace filmmakers and leading actors of the industry and has given the audience some excellent songs. 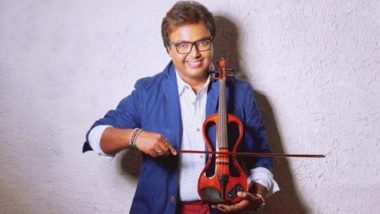 D Imman is mainly known for his works in Tamil Cinema. He has collaborated with some of the ace filmmakers and leading actors of the industry and has given the audience some excellent songs. Imman has composed for more than 100 Tamil films. Be it for songs or background score, the music given by him has always won audiences’ hearts. And today on the occasion of his birthday, from industry members to fans, all have been thanking him for giving wonderful music composition. Thala Ajith's Viswasam Background Score Finds a place in the Trailer of Sidharth Malhotra's Marjaavaan, Composer D Imman Accuses the Makers of Not Taking Prior Permission.

D Imman started to work on music for films from the age of 15 and today he is one of the finest music composers of Kollywood. He has won numerous prestigious accolades for his contributions in the world of cinema. On the occasion of his birthday, let’s take a look at the hit albums composed by Imman.

Imman was only when he made his debut to compose the soundtrack for this Thalapathy Vijay and Priyanka Chopra starrer that had released in 2002. 18 years later, Imman who got nostalgic about his debut, shared a post that read, “Very First title card from my debut film #Thamizhan!! Where my soul satisfying musical journey started!! Praise God!”

After 12 years Imman teamed up with Thalapathy Vijay with this film. Be it the film’s background score or the soulful number, movie buffs enjoyed it thoroughly.

It was a masala entertainer starring Jiiva, Sibiraj and Hansika Motwani in the lead. The film had foot-tapping numbers and one of the songs in it, titled “Athuvutta” was crooned by Imman.

This was the first time that Imman collaborated with Thala Ajith and director Siva for a film and it was even special as it marked his 100th project as well. The film’s music was lauded by critics and fans.

These are some of the popular compositions by Imman. We wish him a very happy birthday and a great year ahead with more mellifluous and mass numbers!

(The above story first appeared on LatestLY on Jan 24, 2021 10:41 AM IST. For more news and updates on politics, world, sports, entertainment and lifestyle, log on to our website latestly.com).