Comedian Bharti Singh and her husband Haarsh Limbachiyaa have reportedly been issued summons by the NCB in connection to the ongoing drug probe that has been carried out after the demise of actor Sushant Singh Rajput. 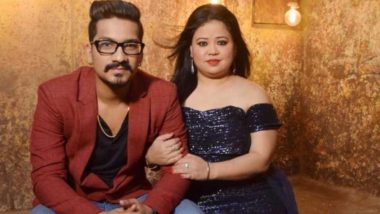 Comedian Bharti Singh and her husband Haarsh Limbachiyaa have reportedly been issued summons by the Narcotics Control Bureau (NCB), reports ANI. As per a report by the news agency, earlier today NCB had conducted a raid at the couple’s residence in Mumbai in connection to the ongoing drug probe that has been carried out ever since the demise of actor Sushant Singh Rajput. Arjun Rampal’s Australian Friend Paul Bartel Arrested by NCB in Drug Case Investigation.

NCB has conducted raids at residences of many popular celebs from the industry and many have also been issued summons. Recently, Arjun Rampal and her girlfriend Gabriella Demetriades were asked to appear at the investigating agency’s office in Mumbai for interrogation. Post questioning, Arjun issued clarification about the substance found by NCB at his residence. He stated, “I am fully cooperating with the investigation. I have nothing to do with drugs. The medicine found at my residence was prescribed. The prescription has been found and handed over.” Agisialos Demetriades, Gabriella’s brother, is currently in the agency’s custody. Arjun Rampal Questioned by NCB For Seven Hours, Says He Has 'Nothing to Do with Drugs'.

The other popular television couple whose residence was reportedly raided by NCB was Sanam Johar and Abigail Pande. Comedienne Bharti Singh is currently seen on the popular comedy show The Kapil Sharma Show.

(The above story first appeared on LatestLY on Nov 21, 2020 01:39 PM IST. For more news and updates on politics, world, sports, entertainment and lifestyle, log on to our website latestly.com).