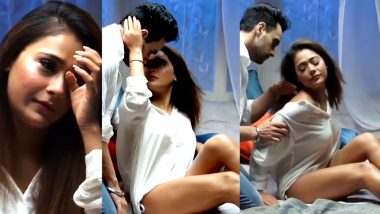 Sara Khan and Angad Hasija's latest video will set the internet on fire! Sara an Angad have been shooting for something and we bet it's going to be just so sexy! How do we know? Well, this video says it all! A scene from their shoot has been LEAKED where Sara and Angad are seen getting intimate in bed. The white satin bedsheets and curtains set the mood just right and we are sure you would want to watch the video on repeat only and only for Angad and Sara's super hot chemistry! Sara Khan Gets NAKED in a Bathtub; Deletes Video on Instagram Later - See Pic.

Angad and Sara have worked in a couple of TV shows earlier including Sapna Babul ka Bidaai, Ram Milaayi Jodi and Saubhagyalaxmi. According to reports, the duo has been shooting for a song which will go on air soon. If this video is anything to go by, we bet it's gonna grab more than just a few eyeballs and raise many eyebrows! Watch Sara and Angad's HOT bedroom scene here-

Sara has been controversy's favourite child right from her Bigg Boss days and this bold scene from the leaked video might also end up being a controversy for her. The actress was recently in the news for sharing a bikini pic online. She got trolled massively for it but had a perfect comeback for haters on social media.

Anyway coming back to the video, we think it is too hot for words! What do you guys think? Tell us in the comments below and stay tuned!

(The above story first appeared on LatestLY on Sep 07, 2018 03:59 PM IST. For more news and updates on politics, world, sports, entertainment and lifestyle, log on to our website latestly.com).