Bihar Panchayati Raj Minister Samrat Chaudhary has said that the state government is going to introduce an Act under which a person having more than two children would not be entitled to contest Panchayat elections. 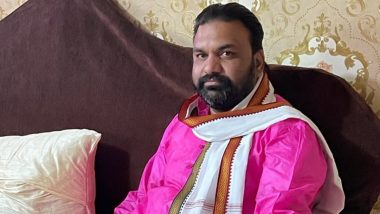 Patna, July 13: Bihar Panchayati Raj Minister Samrat Chaudhary has said that the state government is going to introduce an Act under which a person having more than two children would not be entitled to contest Panchayat elections.

Chaudhary's statement came a day after Bihar Chief Minister Nitish Kumar said that the new population control policy would not help to check the population of the country. Population could be controlled only through education and awareness of women.  Yogi Adityanath, Uttar Pradesh CM Unveils Population Control Policy: Highlights

"The Nitish Kumar government is going to introduce a new population control policy where a person having more than two children, is not entitled to contest Panchayat elections. We will also introduce a law to deny such people other state government facilities," Chaudhary said.

"We currently have an Act in the city Panchayats where candidates having more than two children are disqualified from contesting the polls. Work is currently underway to introduce the same in village Panchayats as well," he said.

"The strong law pertaining to population control may help to check population growth in the country," he said.

"Bihar is the first state where such a law was introduced in the past. It has helped to control the birth rate in urban areas. As education is lacking in rural areas, such a law should be implemented there to check population," Chaudhary said.

Besides Chaudhary, Union Rural Development Minister Giriraj Singh also advocated that a new population control policy should be implemented in the country.

"This is neither related to any religion nor is it a matter of political discussion but it is an issue of development," Singh said.

"Our country's population contribution to the world is 20 percent while we have only 2.5 percent of land," Singh said.

"I congratulate Uttar Pradesh CM Yogi Adityanath for implementing the population control Act in his state. He raised himself above caste, community and vote banks and introduced this law," Singh said.

The statements of these two BJP leaders is a hint of sour political relations with its alliance partner Janata Dal United (JDU). It has raised new issues for discussion in Bihar especially as CM Nitish Kumar on Monday criticized the population policy implemented by Yogi Adityanath in Uttar Pradesh.

Nitish Kumar said that this law will not help to control the population of any state or country.

"I am continuously advocating that educating women is the only way to control the population," Kumar said while indicating that forcible action may not work in the country compared to awareness and self decisions by the common people.

"Uttar Pradesh has endorsed population control policy from China but everyone knows what happened in China. It introduced the one child law and then extended it to two children. The birth can be controlled only after the education of women. When women become educated, awareness about the population automatically comes and the population will be controlled accordingly," Nitish Kumar said.

(The above story first appeared on LatestLY on Jul 13, 2021 03:31 PM IST. For more news and updates on politics, world, sports, entertainment and lifestyle, log on to our website latestly.com).