The Border Security Force (BSF) has unearthed a gang operating from both sides of India-Bangladesh border by nabbing two of their members while smuggling Fake Indian Currency Notes (FICN) into Indian territory. 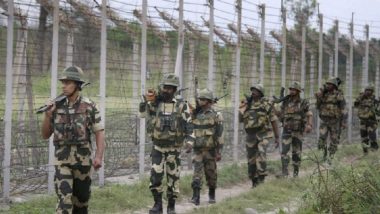 New Delhi, June 8: The Border Security Force (BSF) has unearthed a gang operating from both sides of India-Bangladesh border by nabbing two of their members while smuggling Fake Indian Currency Notes (FICN) into Indian territory.

The racket was busted after the troops of 67 Battalion of BSF Guwahati Frontier apprehended the smugglers with FICN having face value of Rs 2 lakh.  BSF Demands FIR Against Pakistani Pigeon Caught Carrying Small Piece of Paper With Contact Number Near Border

The smugglers were held in a special operation conducted by the BSF troops along the border on Monday, the BSF said in a statement, adding the two smugglers are Indians.

"The consignment was being smuggled from Bangladesh to India border under Dhubri region."

The smugglers have been reportedly handed over to the state police to inquire about their other gang members and find out the details about their operations, hideouts, the suppliers in Bangladesh and many other things related to the case.

Smuggling at 4,096 km India-Bangladesh border has been a common phenomenon and the BSF, which is responsible to guard the border between the two countries, tries to curb the menace with the help of Border Guard Bangladesh.

Smuggling of FICN along with border issues of bilateral interest, trans-border crimes, smuggling of contraband articles and cattle, Indian Insurgent Groups activities from Bangladesh side were discussed at length in the meeting.

(The above story first appeared on LatestLY on Jun 08, 2021 01:45 PM IST. For more news and updates on politics, world, sports, entertainment and lifestyle, log on to our website latestly.com).