Proud of Hindu Traditions, But Will Provide Conducive Atmosphere for Those Celebrating 'Eid': CM Yogi Adityanath

Earlier, opposition leaders raised questions referring to the chief minister's reported response to journalists in Mathura some days back that he did not celebrate 'Eid'. 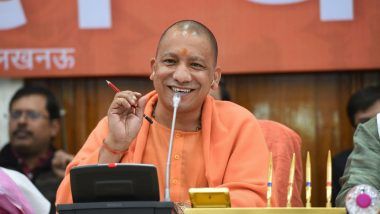 Lucknow, March 7: Uttar Pradesh Chief Minister Yogi Adityanath today rejected opposition's charge that he appeared to be the leader of only one community said that while he was a Hindu, proud of the religion's traditions, his government would provide a conducive atmosphere to those wanting to observe festivals like 'Eid'. Earlier, opposition leaders raised questions referring to the chief minister's reported response to journalists in Mathura some days back that he did not celebrate 'Eid'.

During his reply to the motion of thanks to the Governor's address in the state Assembly, Adityanath also took pot-shots at rival parties, claiming it was the "frustration and helplessness" of the Samajwadi Party that led it to reach an understanding with bitter opponent Bahujan Samaj Party ahead of the Gorakhpur and Phulpur bypolls. He also brushed aside opposition charges of fake encounters being staged, of BJP encouraging divisive tendencies, while also asserting that no person would be allowed to stop the march of the tricolour.

Seeking to highlight the bitter differences between the Akhilesh Yadav and Mayawati led parties, Adityanath said it was the SP's "frustration and helplessness" that it went and "sat in the lap of the BSP". He said that BSP leader Lalji Verma had met him in connection with the memorials set up by the Mayawati government. I told him that it was the duty of the government to maintain them as the money spent on them was that of the state, Adityanath said.

"But (SP) has said that they will demolish them...We will however not allow it to happen till we are in power...Ask them if the state guest house incident will not be repeated. Some things do not change, as it is not in their psyche. Why do you try to change those who do not want to change? If the scorpion has to bite it will do so," the chief minister as he sought to press the bitter differences between the UP's longtime political opponents.

He said the real answer will be given by the people in the Gorakhpur and Phulpur in the upcoming Lok Sabha bye-election (in which BSP is backing SP candidates). "The red flag has been drowned in Tripura and now it is the turn of the red cap which will be drowned in UP as today its the time of saffron which is indicative of development," Adityanath said attacking the SP.

Only two kinds of people are feeling the heat - those indulging in loot and the others who used to create anarchy, he said. Replying to a charge levelled by the leader of Opposition Ram Govind Chaudhary that Adityanath appeared to be the chief minister of only some so-called Hindus through his language, work and thinking and that he had ducked a journalist's query on Eid, the chief minister said that he was a Hindu and did not celebrate Eid.

"I am a Hindu and proud of my traditions and there is nothing wrong in it, but the government will extend the help for peaceful Eid celebrations in the state," he said adding that he did not indulge in drama like some others. I have visited various religious centres, as we want to give momentum to spiritual tourism along with pilgrimage which has vast scope in the state, Adityanath said adding that he had even visited the Taj Mahal. "You think you have a patent on it," the chief minister said.

He rejected allegations that fake encounters were being staged and said the perception of UP before the country and the world had changed with a successful Investors' Summit. He attacked SP citing some recent incidents of crime, in which, he claimed men linked with the opposition party were involved and also alleged that a majority of the land mafia was also connected with it. Taking exception to Chaudhary's statement that BJP's wrong policies will be responsible in case of any further partition, the chief minister said that a statement like this from a person who has taken the oath in the name of Constitution cannot be accepted.

"The country is emerging stronger..India will not be divided. However, those who talk about it will be smashed...If the SP has such divisive tendencies, it is my appeal to them to keep it limited to themselves and their party," he said.

On the Kasganj violence in which one youth was killed on the Republic Day, Adityanath said his government will deal with such elements sternly. "The countrymen are committed to upholding the honour of the 'Tiranga' and will not let go of any person who forcefully tries to stop Tiranga yatra," he said. Terming his one year in office which he will be completing later this month, as the most successful one, he attacked the previous governments of the past 15 years for not paying attention to the development of the state. Earlier in his speech, Chaudhary alleged that the government had failed on all fronts.