Driven by a rise in orders from non-metro towns across India, e-commerce platform Snapdeal's first Diwali sales volumes of this year saw a growth of 52 per cent over last year, the company said on Monday. 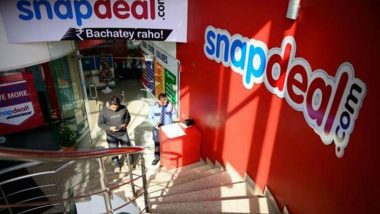 New Delhi, October 7: Driven by a rise in orders from non-metro towns across India, e-commerce platform Snapdeal's first Diwali sales volumes of this year saw a growth of 52 per cent over last year, the company said on Monday.

Nine out of every 10 orders received on the platform were from non-metro towns in the country, said Snapdeal, which now has more than 500,000 registered sellers. Snapdeal's first Diwali sale ran for eight days -- from September 29 to October 6.

While the increase in volumes from smaller cities was a pan-India trend, cities like Nagpur, Surat, Vijayawada, Chandigarh, Panaji, Jamshedpur, Shimla and Guwahati emerged as the new e-commerce hotspots of India, with orders surging at least four-fold over the previous year.

Over 120 cities and towns across the country registered at least 2x volumes compared to last Diwali sales.

"All the sellers on Snapdeal are independent, third-party sellers and hence the growing volumes on our marketplace translate directly into greater opportunities for India's small and medium businesses," Kunal Bahl, CEO & Co-Founder, Snapdeal, said in a statement.

The most popular items in the sale were everyday apparel, with both men and women shoppers preferring track pants, t-shirts and shorts over formal wear. In fashion accessories, casual shoes, flip flops, belts and artificial jewellery were the top selling items.

Personal care products continued their recent trend of rising sales with shaving and grooming products for men and epilators for women amongst the most bought products.

Bedsheets from Jaipur were the single largest selling items that received orders from over 180 cities across India. Snapdeal said its second "Snap-Diwali" sale will be live on October 11 and will run till October 13.

(The above story first appeared on LatestLY on Oct 07, 2019 05:13 PM IST. For more news and updates on politics, world, sports, entertainment and lifestyle, log on to our website latestly.com).