Amidst the counting of votes for the Karnataka Assembly elections wherein the Bharatiya Janata Party (BJP) has taken a clear lead, the Congress on Tuesday alleged that electoral process was rigged. 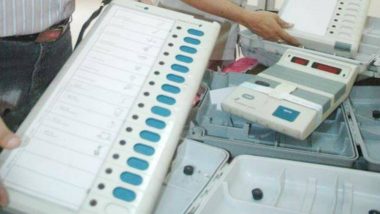 New Delhi, May 15:  Amidst the counting of votes for the Karnataka Assembly elections wherein the Bharatiya Janata Party (BJP) has taken a clear lead, the Congress on Tuesday alleged that electoral process was rigged.

Speaking to ANI, Congress spokesperson Mohan Prakash said, "People are voting for one party but votes are going to another because the situation in Karnataka was clearly different."

"Every survey showed that Karnataka's first choice is Siddaramaiah, he brought the state to the top in investments, and even after all of this if the results don't reflect that, then every politico of this country should contemplate where we are heading," he elaborated.

Preempting the response to the party's allegation, Prakash said that every political party including the BJP has raised questions on polling through Electronic Voting Machine (EVM)

"Now when all parties are doubting EVMs, then the question I have for both BJP and Election Commission is that what problem do you have in conducting polls through ballot?" he added.

As per the official trends, the BJP is leading in 115 constituencies, while the Congress and Janata Dal (Secular) are leading in 63 and 40 seats respectively, thus implying that the saffron party could emerge as the single largest party in the state.

Meanwhile, Karnataka Minister DK Shivkumar took responsibility for the loss on behalf of the local leadership, he said, "Rahul Gandhi did his best, but it is we who have lost the elections. We, the local leadership, should have en-cashed it in a proper way and because of which we lost it."

Counting of votes began at 8 a.m. for 222 out of 224 assembly constituencies in 58,546 polling stations in the state. The elections in two constituencies, Jayanagar and Rajarajeshwari Nagar, both in Bengaluru have been postponed earlier.

On a related note, a party or an alliance needs 112 seats to form the government. A total of 2,654 candidates, including 216 women candidates were in the fray for the Assembly Elections this year.