Making a clarion call to NGOs and volunteers to step up the awareness drive in a campaign against dowry, Kerala Governor Arif Mohammed Khan said he is ready to work as a volunteer. 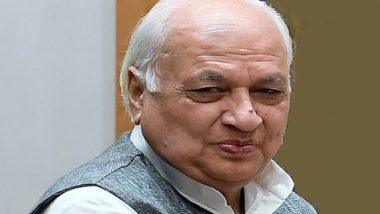 Thiruvananthapuram, June 28: Making a clarion call to NGOs and volunteers to step up the awareness drive in a campaign against dowry, Kerala Governor Arif Mohammed Khan said he is ready to work as a volunteer.

"Dowry is an evil and as far as laws are concerned, they are very strong. But what we need is to create a general and social awareness against it. Here, the role of the media is very important," said Khan while speaking to the media soon after visiting the house of a young 24-year-old final year ayurveda student, who took her life last week when she was unable to bear the torture from her husband, Kiran Kumar, a government officer working as an assistant motor vehicle inspector.  Dowry Claims Life in Delhi, Pregnant Woman Hangs Self After Being Beaten, Harassed by Husband for Dowry

Khan, who by now has become hugely popular in the way he conducts himself, said in Kerala there is no dearth of NGOs or volunteers.

"I am ready to work as a volunteer and we should create awareness against this. It should be made very clear to anyone who asks for dowry, that they are not interested to proceed with the marriage proposal," added Khan.

In the past two weeks numerous dowry harassment cases surfaced forcing chief minister Pinarayi Vijayan to take new steps and appointing a female IPS officer in charge to deal with all such cases and on the flip side M.C. Josephine, a senior CPI-M leader and the chairperson of the Kerala Women's Commission had to quit her post following a huge outrage against a hapless lady who called her for airing a complaint that she was being harassed in the name of dowry.

(The above story first appeared on LatestLY on Jun 28, 2021 02:10 PM IST. For more news and updates on politics, world, sports, entertainment and lifestyle, log on to our website latestly.com).