Akhara Parishad Supports Change of Name for Hyderabad to Bhagyanagar

The Akhil Bharatiya Akhara Parishad (ABAP), the apex body of saints, has come out in support of the suggestion for a change of name of Hyderabad. 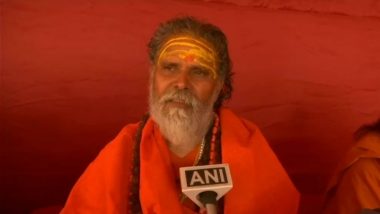 Prayagraj, Dec 1: The Akhil Bharatiya Akhara Parishad (ABAP), the apex body of saints, has come out in support of the suggestion for a change of name of Hyderabad.

ABAP Chairman Mahant Narendra Giri has supported the suggestion made by Uttar Pradesh Chief Minister Yogi Adityanath during his recent visit to Hyderabad and said that it might be possible that a new name changes the city's "bhagya" (fate) too.

Yogi Adityanath, while campaigning in Hyderabad for municipal polls last week, had said that the name of the Telangana capital should be changed to Bhagyanagar. Asaduddin Owaisi on Yogi Adityanath's 'Bhagyanagar' Remark: Your Entire Generation Will End But Hyderabad Will Retain Name.

"We renamed Faizabad as Ayodhya and Allahabad as Prayagraj after the BJP came to power in UP," he had said.

Mahant Narendra Giri said on Tuesday, "ABAP extends its support to Yogi Adityanath on this issue. Mughals had ruled the country for centuries and changed the names of many old and traditional cities.

"As the name of Allahabad and Faizabad have already been changed, Hyderabad should also be renamed. I think no one, including the All India Majlis-e-Ittehadul Muslimeen chief Asaduddin Owaisi, should have any objection if Hyderabad's name is changed to Bhagyanagar."

"Ho sakta hai ki Hyderabad ka naam badalkar Bhagyanagar kiye jane se Hyderabad ka bhi bhagya badal jaye (It might be possible that Hyderabad's fate changes once it is renamed as Bhagyanagar). The people of Hyderabad should also support any such change in the name," he said.

The ABAP had recently praised the Adityanath government for bringing a strict law against unlawful religious conversions.

The ABAP, of late, has been taking keen interest in issues related to politics, particularly those related to Hindutva.

(The above story first appeared on LatestLY on Dec 01, 2020 09:53 AM IST. For more news and updates on politics, world, sports, entertainment and lifestyle, log on to our website latestly.com).