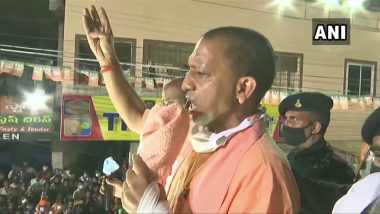 Hyderabad, November 28: Uttar Pradesh Chief Minister Yogi Adityanath powered the Bharatiya Janata Party (BJP) campaign in Hyderabad on Saturday, with a high-voltage rally in the city. The senior party leader had arrived in the Telangana capital to boost the BJP's prospects in the Greater Hyderabad Municipal Corporation (GHMC) elections 2020.

"Some people were asking me if Hyderabad can be renamed as Bhagyanagar. I said - why not. I told them that we renamed Faizabad as Ayodhya and Allahabad as Prayagraj after BJP came into power in UP. Then why Hyderabad can't be renamed as Bhagyanagar?" questioned the saffron politician. BJP Manifesto For GHMC Elections 2020: Free Travel For Women in Buses, Metros, LRS Abolishment And More.

Ahead of the 2019 assembly elections in Telangana, the BJP had promised to rename Hyderabad and Karimnagar cities if elected to power. The party was, however, handed a crushing defeat in the polls that saw K Chandrasekhar Rao's TRS winning over a two-third majority.

Yogi, apart from raising the Bhagyanagar pitch, also raised the issues of Article 370 repeal and Ram temple construction while addressing the party workers and supporters in Hyderabad.

"Under the guidance of PM Narendra Modi, Home Minister Amit Shah repealed Article 370, giving full freedom to the people of Hyderabad and Telangana to purchase land in Jammu and Kashmir," he said.

The 150-seat GHMC would be contested on December 1. The civic poll results would be declared by the State Election Commission (SEC) on December 4. In 2015, the ruling TRS had won 99 seats, whereas, the AIMIM had secured victories in 44.

(The above story first appeared on LatestLY on Nov 28, 2020 09:14 PM IST. For more news and updates on politics, world, sports, entertainment and lifestyle, log on to our website latestly.com).