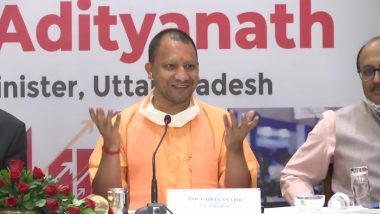 The Uttar Pradesh CM added that the people of “Bhagyanagar” had shown trust on Prime Minister Narendra Modi’s leadership. He tweeted, “I thank people of Bhagyanagar for showing trust in Pm Narendra Modi in Hyderabad Municipal Corporation elections.” Notably, during the campaigning, the UP CM had called upon the people to change the name of Hyderabad to "Bhagyanagar"GHMC Election Results 2020: BJP Stuns With Win in 48 Seats of Hyderabad Civic Body, TRS Reduced to 55, AIMIM Retains 44.

Results of GHMC elections stunned political experts as the BJP increased its tally from to 44. The Telangana Rashtra Samithi (TRS) emerged as the single largest party, but its tally shrank from 99 to 55 seats. The AIMIM succeeded in retaining its 44 wards, whereas, only two Congress candidates emerged victorious. The counting of votes started from 8 am onwards. The polling body had set up 30 counting centres, and a total of 8,152 personnel would be engaged in counting activities.

(The above story first appeared on LatestLY on Dec 04, 2020 10:29 PM IST. For more news and updates on politics, world, sports, entertainment and lifestyle, log on to our website latestly.com).