Citing a Supreme Court-appointed audit panel's report, the BJP on Friday said the Delhi government "inflated" its oxygen requirement during the second wave of COVID-19 by four times and accused Chief Minister Arvind Kejriwal of "heinous crime" and "criminal negligence". 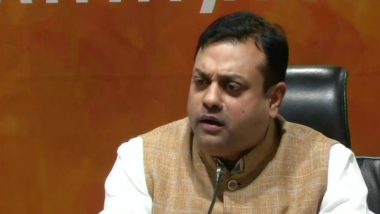 Addressing a press conference, BJP spokesperson Sambit Patra cited the report to note that the Delhi government had demanded 1,140 MT of the life-saving gas during the peak of the second wave even though it could utilise 209 MT.

The requirement was 351 MT even if the panel went by the Delhi government's formula while it was 289 MT according to the central government's estimate, he said, adding that only 209 MT was expended while Kejriwal projected an requirement of 1,140 MT. Delhi Govt Exaggerated Oxygen Need During COVID-19's Second Wave Peak by 4 Times, States SC Panel.

"Imagine the amount of criminality. This is a heinous crime by Arvind Kejriwal.

This is criminal negligence as the panel says he sought four times more oxygen than required. The report has exposed the politics he did to shift blame from his incompetence and failure to deal with COVID-19," Patra claimed.

Delhi Deputy Chief Minister Manish Sisodia, however, accused the BJP of lying about the existence of such a report.

"There is no such report. We have spoken to the members of the Oxygen Audit Committee formed by the Supreme Court. They said they have not signed or approved any such report.

Patra noted that many lives were lost in Delhi due to lack of oxygen and expressed hope that Kejriwal will be held accountable and punished by the Supreme Court.

Due to Kejriwal's lies, he alleged, 12 states were affected as oxygen supply was diverted from them to meet the needs of the national capital.

Patra said many lives could have been saved if the Delhi government had not inflated its needs, and states like Uttar Pradesh and Haryana had to suffer.

"You were proving incompetent and a failure. You had to shift blame and for that you pressed false alarm and spread panic across the country," he said, attacking the Delhi chief minister for targeting the Modi government then for shortage in oxygen supply and meting out "step-motherly" treatment to Delhi.

The Delhi chief minister works with the formula of "100 per cent advertisement and zero per cent Covid management", and spent over Rs 1,000 crore on advertisement, he said, alleging that Kejriwal has been doing similar politics on vaccination and ration programmes in the capital.