"The revenue collection through VAT (which is levied on ad valorem basis) will also dip automatically. State officials have informed me that we will suffer a loss of around Rs 500 crore (annually),” the CM said. 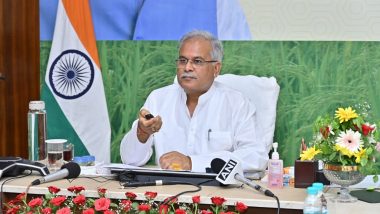 Raipur, May 23: Chhattisgarh Chief Minister Bhupesh Baghel on Monday said the reduction in excise duty on petrol and diesel by the Centre would cause a loss of around Rs 500 crore to the state exchequer, and reiterated that the Union government should withdraw the cess imposed on these fuels.

He was talking to reporters at the Police Lines helipad here before leaving for Dantewada district as part of his constituency-wise public interaction drive 'Bhent Mulaqat'. Union Finance Minister Nirmala Sitharaman had on Saturday announced a reduction in the central excise duty on petrol by Rs 8 per litre and on diesel by Rs 6 per litre.

Asked whether the Chhattisgarh government will reduce the Value Added Tax (VAT) on petrol and diesel, "Baghel said, “I could not understand the (Sunday's) statement of Nirmala Sitharaman ji that reduction on excise duty will not impact state's share in it." If the central excise is cut, then 41 per cent of its share which goes to the state would be automatically reduced, he said.

"The revenue collection through VAT (which is levied on ad valorem basis) will also dip automatically. State officials have informed me that we will suffer a loss of around Rs 500 crore (annually),” the CM said. Fuel Price Cut in India: Finance Minister Nirmala Sitharaman Says ‘Centre Bears Full Cost of Excise Duty Cut on Petrol, Diesel’.

Baghel said he has been demanding that the BJP-led Centre withdraw the cess it started imposing on petrol and diesel since last year, and impose the same rate of tax on these products as was charged during the UPA government (which lost power in 2014).

Sitharaman had on Sunday said the the Rs 8 a litre cut in excise duty on petrol and Rs 6 reduction on diesel have been done in road and infrastructure cess levied on the two fuels, collection on which was never shared with states. The entire burden of these two duty cuts is borne by the Centre, she had said.