Salian's mother had filed a complaint, alleging that Narayan Rane made slanderous and misleading claims about Disha's death at a press conference on February 19, 2022, in the presence of his son. 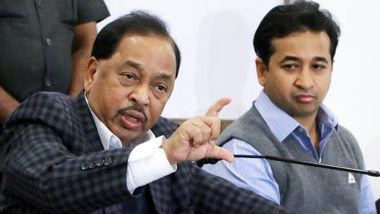 Salian (28) allegedly committed suicide by jumping off a high-rise in suburban Malad on June 8, 2020. Six days later, Rajput was found hanging in his flat in Bandra area here.

Salian's mother had filed a complaint, alleging that Narayan Rane made slanderous and misleading claims about Disha's death at a press conference on February 19, 2022, in the presence of his son.

Fearing arrest, the father-son duo had sought anticipatory bail from the court.

Their lawyer Satish Maneshinde said before the court on Tuesday that Narayan Rane and Nitesh Rane have become a "punching bag" for the Maharashtra government.

Apart from a single statement, there is no other evidence, and several bogus cases have been registered against them elsewhere, he had submitted.

Referring to Ranes' visit to the police station earlier this month, Maneshinde said they were at the station from 1.45 pm to 10 pm.

“For such a complaint, a statement can be recorded in five minutes. It does not require eight to ten hours,” the lawyer said.

Maneshinde also said that Narayan Rane had only stated that the probe into Salian's death had not been carried out properly, and he was seeking justice for her. This was not a case where custodial interrogation was necessary.

Special public prosecutor Ashoke Gharat had argued that police were “going by fact and law” and not “by political rivalry." There was a through probe into Salian's death and her family was satisfied with it, the prosecutor said.