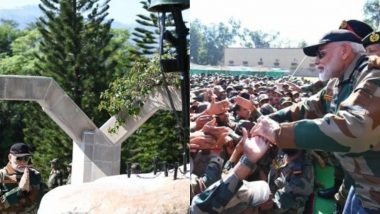 The Prime Minister’s visit coincided with Infantry Day celebrations, which is observed to mark the landing of first Indian troops in Jammu and Kashmir in 1947 to push back Pakistan supported intruders. While returning from Rajouri, PM Modi also visited the Pathankot Air Force station, the home base of newly-inducted Apache attack helicopters. This the sixth consecutive time that PM Modi celebrated Diwali with security personnel.

Moreover, this is for the third time that the Prime Minister visited Jammu and Kashmir to celebrate Diwali with the troops in the border state since 2014, and first after the abrogation of Article 370 provisions. Last year, PM Modi visited Harshil district near the India-China border in Uttarakhand to celebrate Diwali with jawans of the Indian Army and the Indo-Tibetan Border Police (ITBP).

In 2014, PM Modi celebrated Diwali with Army troops in Siachen. In 2015, he celebrated the festival with BSF soldiers at the LoC near the India-Pakistan border in Punjab, while in 2016, he spent it with ITBP troops in Himachal Pradesh. In 2017, Prime Minister rejoiced Diwali with jawans posted along the LoC in Jammu and Kashmir's Gurez.

(The above story first appeared on LatestLY on Oct 27, 2019 05:02 PM IST. For more news and updates on politics, world, sports, entertainment and lifestyle, log on to our website latestly.com).