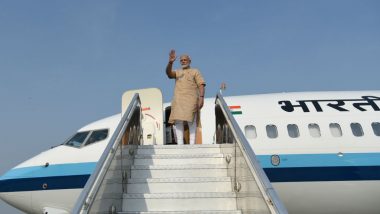 New Delhi/Islamabad, October 27: Pakistan has refused to open its airspace for Prime Minister Narendra Modi's plane to visit Saudi Arabia, Pakistani media reported on Sunday. According to reports, Pakistan Foreign Affairs Minister Shah Mahmood Qureshi will inform about Islamabad's decision to the Indian High Commissioner through a written statement. The move is seen as Pakistan's retaliation to India's move to withdraw Jammu and Kashmir's special status. India, Pakistan Engage in War of Words Over Article 370 Repeal at NAM Summit.

India requested PM Modi's aircraft be allowed overflight on September 20 while flying towards Germany on way to the US, and on its return journey on September 28. However, Pakistan refused to grant overflight to PM Modi's aircraft through Pakistani airspace. Earlier in September, Pakistan had denied permission to Air India One carrying President Ram Nath Kovind, to fly over its airspace during an official trip to Europe. Pakistan Summons New Delhi's Envoy Gaurav Ahluwalia After Indian Army Pounds 4 Terror Launch Pads in PoK.

For all VVIP visits, the foreign countries are required to be informed of the use of their airspace. According to the International Civil Aviation Organization (ICAO) charter, denial of airspace cannot be done by any country, except in the event of war. India had criticised Pakistan over its decision to deviate from established international practice, after Islamabad refused to grant overflight to PM Modi's plane.

India's Ministry of External Affairs' spokesperson Raveesh Kumar in a statement said that India "regrets the decision of Pakistan to deny overflight clearance for the VVIP special flight for a second time in two weeks, which is otherwise granted routinely by any normal country." "Pakistan should reflect upon its decision to deviate from well established international practice, as well as reconsider its old habit of misrepresenting the reasons for taking unilateral action," he said.

(The above story first appeared on LatestLY on Oct 27, 2019 04:28 PM IST. For more news and updates on politics, world, sports, entertainment and lifestyle, log on to our website latestly.com).