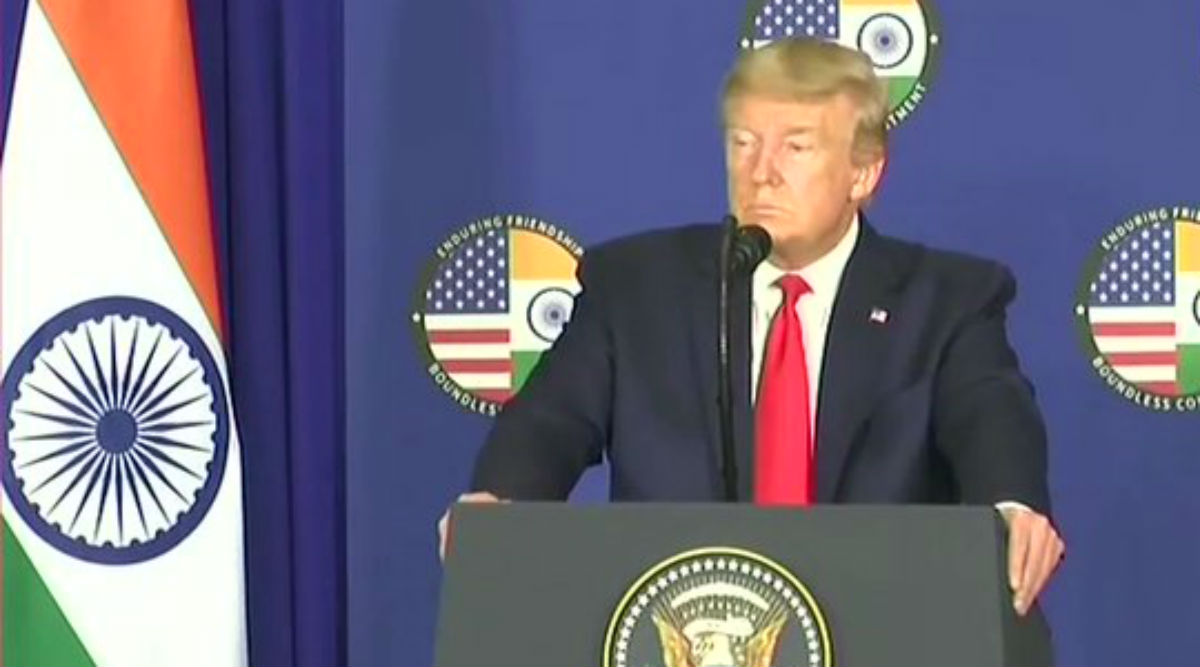 New Delhi, February 25: US President Donald Trump on Tuesday said he spoke to Prime Minister Narendra Modi on religious freedom in India. Asked for his reaction to the violence that erupted in several parts of northeast Delhi over the Citizenship Amendment Act (CAA), Donald Trump said that PM Narendra Modi wants people to have religious freedom but they did not discuss Monday and Tuesday's incidents of violence in Delhi. Donald Trump in India, Day 2 Live News Updates.

"We did talk about religious freedom. The PM said he wants people to have religious freedom. They have worked really hard on it. I heard about the individual attacks but I did not discuss it. It is up to India," President Trump said. Specifically asked about the CAA, President Trump indicated that it was an internal matter of India. "I want to leave that to India and hopefully, they will make the right decision for their people," he said. Delhi Violence: Journalists Attacked by Mob While Covering Clashes Between Pro And Anti CAA Groups.

Asked about terrorism emanating from Pakistan, President Trump said that Islamabad was taking efforts. "We talked a lot about it (terrorism in Pakistan) at length today. No question it is a problem. They are working on it. I said I will do whatever I can do to help because my relationship with both gentlemen (PM Modi and Pakistan Prime Minister Imran Khan) is so good," he said. He reiterated that he would do anything he can to help solve the Kashmir issue.

Earlier today, India's Foreign Secretary Harsh Vardhan Shringla said that contentious issues including the Citizenship Amendment Act (CAA), the National Register of Citizens (NRC) and the alleged dwindling religious freedom in India were not raised during the bilateral meeting between PM Modi and President Trump.

#WATCH US President on Delhi violence & CAA: PM said he wants people to have religious freedom. I heard about individual attacks but I did not discuss it. It is up to India. pic.twitter.com/tk0LOOo1lJ

Violent clashes between the pro and anti-Citizenship Amendment Act (CAA) groups erupted in several parts of Delhi's North-East district on Monday shortly after President Trump landed in Ahmedabad. Violence continued on Tuesday even as Delhi Chief Minister Arvind Kejriwal and Lieutenant Governor Anil Baijal called for peace. As many as 10 people, including a head constable, have lost their lives in the violence.

As tension prevailed, Union Home Minister Amit Shah held a meeting with Anil Baijal, Arvind Kejriwal and representatives of various political parties, Delhi Police Commissioner and officials of the Ministry of Home Affairs. Following the meeting, CM Kejriwal said that discussion with Amit Shah was "positive" and said all political parties have stressed upon restoring peace.