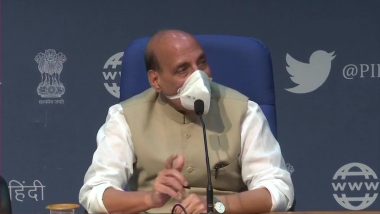 New Delhi, September 20: Defence Minister Rajnath Singh appeared before the press on Sunday, hours after chaotic scenes were witnessed in the Rajya Sabha during the passage of two controversial agriculture reform Bills. Rajnath attempted to allay concerns among the protesting farmers by pointing out that he is a farmer himself. 'Bandh in Punjab and Haryana': BKU to Support September 25 Shutdown If Govt Doesn't Budge on Farm Bills.

"I want to assure that MSP and APMC won't end in any case, as a farmer myself," the senior Bharatiya Janata Party (BJP) leader said. "This government is committed to the cause of farmers and will never let them down," Rajnath added. Farm Bills: What Are The 3 Legislations Brought by Modi Government? Why Are Farmers Protesting? All You Need to Know.

The "assurance" by the Defence Minister comes amid raging protests in Punjab and Haryana against the farm reform legislations moved by the Narendra Modi government. The protesters have alleged a ploy to dismantle the system of MSP, which guarantees minimum support price to the farmers. Agricultural Reform Bills: Rajya Sabha Passes 2 Farm Bills Amid Protests by Opposition Leaders And Farmers.

#WATCH I am also a farmer and I want to assure farmers of the country that MSP (minimum support price) & APMC (agricultural produce market committee) systems are not going to end: Defence Minister Rajnath Singh on #AgricultureBills pic.twitter.com/fFdI0AsuKs

Rajnath blamed the Opposition for instigating the protesters by spreading "baseless rumours". He also accused the Congress and Trinamool Congress of undermining the democratic norms in Rajya Sabha by tearing up papers placed on the Speaker's desk.

"What happened in Rajya Sabha today was saddening, unfortunate and shameful. It is the responsibility of the ruling side to enable discussions in the House but it is also the duty of the Opposition to maintain decorum," Rajnath said, referring to Trinamool lawmaker Derek O'Brien who rushed to the Well of the House and tore pages when the farm bills were being taken up for passage.

"As far as I know, this has never happened in the history of Lok Sabha or Rajya Sabha. This happening in Rajya Sabha is an even bigger matter. Attempts are being made to mislead the farmers on the basis of rumours. What happened is against the decorum of House," the Defence Minister added.

(The above story first appeared on LatestLY on Sep 20, 2020 08:05 PM IST. For more news and updates on politics, world, sports, entertainment and lifestyle, log on to our website latestly.com).