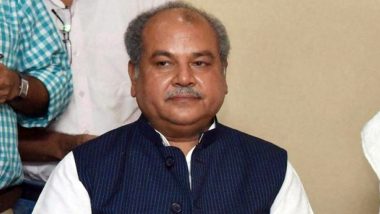 New Delhi, July 8: The Union Agriculture Minister Narendra Singh Tomar on Thursday again reiterated the Centre's stand on farm Laws. Tomar said that the Central government would not repeal the three farm laws enacted by Parliament last year. The Union Agriculture Minister also appealed to the protesting farmers to end their agitations. He said that the government is ready to hold talks with farmers.

Tomar said, "The government had asked farmer unions that it would discuss any suggestion on the farm laws except repealing them. The government is sensitive to the farmers' protest." During the press conference after the cabinet meeting, the union minister assured that APMCs would be strengthened. Farm Laws Protest: Farmers ‘Reinforce’ Protest Site to Guard Against Rain, Storm.

Tomar stated, "APMCs will not be done away with, even after new (farm) laws were introduced, the Centre had declared in Budget that APMC will be part of the Rs 1 lakh crores infrastructure fund. APMC can benefit from the fund through loans, interest waivers." He further added, "Efforts will be made to provide more resources to the APMCs. Rs 1 lakh crores allocated under Atmanirbhar Bharat to Farmers Infrastructure Fund can be used by APMCs: Narendra Singh Tomar, Agriculture Minister." Farmers’ Protest: Agitating Farmers To Protest at Raj Bhavans on June 26 Against 3 Farm Laws.

Thousands of farmers, mainly from Punjab, Haryana and western Uttar Pradesh, have been camping at Delhi's borders for more than seven months now in protest against the three laws that they say will end state procurement of crops at the minimum support price. A total of 11 rounds of talks took place between the Centre and the farmers' unions over the laws.

However, the talks remained inconclusive. The last round of talks was held on January 22. Talks have not resumed following widespread violence during a tractor rally by protesting farmers on January 26. The Supreme Court has put on hold the implementation of the three laws till further orders and had set up a committee to find solutions. The committee has already submitted the report.

(The above story first appeared on LatestLY on Jul 08, 2021 08:33 PM IST. For more news and updates on politics, world, sports, entertainment and lifestyle, log on to our website latestly.com).