Gandhi Family Can Go to Any Extent To Get Power, Says BJP Leader Sambit Patra

"Opposition leaders can find thousands of reasons to attack the BJP but this is petty politics." Patra said. 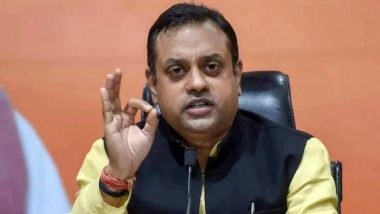 It also alleged that the Gandhi family can go to any extent to grab power. Man From Bihar's Buxar District Released From Pakistan Jail After 12 Years.

Talking to media at party headquarters about recent clashes in a number of states during Ram Navami processions, BJP national spokesperson Dr Sambit Patra said that incidents like these happen when senior leaders like Gandhi and Thackeray make such remarks due to their appeasement policy.

Referring to the former Congress president's comment that he had no interest in power despite being born in its midst, the BJP spokesperson said, "These remarks were aimed at provoking people and questioning the existence of Lord Ram's underline his desperation for the power. The Gandhi family can go to any extent to get power."

Hitting out at Maharashtra Chief Minister Thackeray's remark that what issue the BJP would have raised if Lord Ram was not born, Patra said: "Opposition leaders can find thousands of reasons to attack the BJP but this is petty politics."

(The above story first appeared on LatestLY on Apr 11, 2022 05:36 PM IST. For more news and updates on politics, world, sports, entertainment and lifestyle, log on to our website latestly.com).