Adani Group Chairman Gautam Adani is no longer the second richest man in Asia as his wealth has declined by over $13 billion this week. 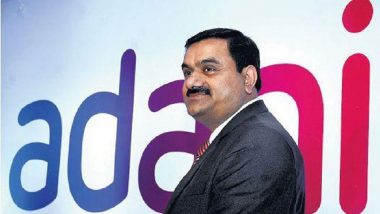 According to the Bloomberg Billionaires Index, Adani's net worth has tumbled by about $13.2 billion to $63.5 billion this week. Prices of the Adani Group stocks fell after news broke that the the National Securities Depository Limited (NSDL) froze the accounts of Albula Investment Fund, Cresta Fund and APMS Investment Fund effective May 31. The funds reportedly own more than Rs 43,500 crore or $6 billion in four Adani group firms. Adani Transmission Net Jumps Four-fold to Rs 256.55 Crore in March Quarter.

A report by The Economic Times said the three accounts were frozen because of insufficient disclosure of information regarding beneficial ownership under the Prevention of Money Laundering Act (PMLA). The frozen accounts won't be able to sell or buy new securities. After the news spread, the Adani Group called the report "blatantly erroneous" and alleged it was "done to deliberately mislead the investing community".

"Given the seriousness of the article and its consequential adverse impact on minority investors, we requested Registrar and Transfer Agent, with respect to the status of the Demat Account of the aforesaid funds and have their written confirmation vide its e-mail dated 14 June 2021, clarifying that the Demat Account in which the aforesaid funds hold the shares of the Company are not frozen," the company said in a statement.

Prior to the recent developments this week, Adani, who started as a commodity trader, was closing the gap with Mukesh Ambani as Asia’s richest man. Many had predicted that he would soon dethrone Ambani.

(The above story first appeared on LatestLY on Jun 18, 2021 10:16 AM IST. For more news and updates on politics, world, sports, entertainment and lifestyle, log on to our website latestly.com).