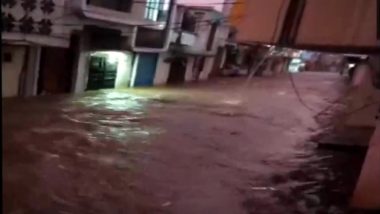 Hyderabad, October 18: Heavy rains lashed Hyderabad in the past few days. On Saturday also heavy rains pounded the city causing waterlogging and severe flooding in many areas. The city was devastated due overnight showers. Flash floods were reported in Hyderabad after the third major lake -  Balanagar Lake  - of the city breached, reported NDTV. Telangana: Heavy Rains, Flash Floods Wreak Havoc in Hyderabad and Other Parts, 50 Dead.

It is the third lake which breached in the past one week. Several videos of waterlogging streets of Hyderabad surfaced on social media. In one such video from Chandrayangutta area, it could be seen that the first floors of buildings in the entire area were completely submerged in the deluge. In other videos, people could be seen swimming in the floodwater to reach their destination. Heavy traffic snarls were also reported from most parts of the city as vehicles got stuck due to waterlogging. Hyderabad Floods in Pics and Videos: Shocking Visuals Show Rainwater Flooding Houses As Heavy Rainfall Continues in the City.

Videos of Flooded Streets in Hyderabad:

People Could Be Seen Swimming in Floodwater to Reach Their Destination:

First city in the world Hyderabad,where u can swim and drive your car on the same road simultaneously ..😆#HyderabadRains #HyderabadFloods pic.twitter.com/m0DtBSLL9F

Vehicles Swept Away in Floods:

On Saturday, between 8:30 a.m. and 7 p.m., as many as 40 locations in the tech city received rainfall above 23 mm. Bandlaguda in Uppal Mandal of Medchal - Malkajgiri district, which is part of Hyderabad received 102.3 mm rainfall, highest, followed by Saroornagar (93.9 mm), Thatiannaram (91 mm), Pedda Amberpet Hanuman Temple area (89.5 mm) and others. Saturday's rain damaged Falaknuma bridge in the city which leads to Mehboobnagar, forcing officials to shut that road.

Meanwhile, the Met department forecast thundershowers at most places in Telangana over the next four days, accompanied by lightning. Heavy rain is very likely to occur at isolated places in Telangana districts on Monday. "Heavy to very heavy rain is likely to occur at isolated places in south Telangana districts," said a Met official about Tuesday. Telangana Director General of Police (DGP) Mahender Reddy alerted all the policemen to monitoring the situation in their respective jurisdictions, considering the Met department forecasting rains over the next five days.

(The above story first appeared on LatestLY on Oct 18, 2020 09:23 AM IST. For more news and updates on politics, world, sports, entertainment and lifestyle, log on to our website latestly.com).