In a written reply to a question on estimated job loss or work loss post-lockdown especially for those indirectly dependent on the Railways for their livelihoods, he said the Ministry has not undertaken any such study. 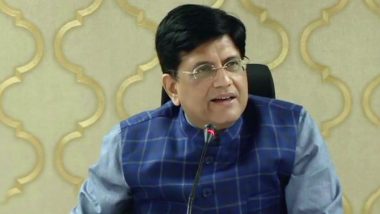 In a written reply to a question on estimated job loss or work loss post-lockdown especially for those indirectly dependent on the Railways for their livelihoods, he said the Ministry has not undertaken any such study.

"However, to expeditiously re-start economic activities after lifting of lockdown so as to provide employment opportunities to the contract workers engaged by contractors, Railways took a number of measures...Under the GKRA announced by Government on 20.06.2020 for 125 days, Railways generated 14,14,604 mandays employment in 140 projects," he said. Indian Railways Cancels All Trains Till March 31? PIB Fact Check Debunks Fake Viral Message.

He said employment was generated under the GKRA in identified districts across six states of Bihar, Uttar Pradesh, Rajasthan, Madhya Pradesh, Jharkhand and Odisha.

Instructions were issued to release wages/payments to contractual staff directly engaged by the Railways and outsourced staff engaged through contractors, who could not attend duty during the lockdown period upto May 31, 2020, he said.

The minister said measures were also taken to increase the cash flow of contractors so that they could expedite the execution of works which could then result in a corresponding increase in the engagement of contract workers on work sites.

He said these steps included release of performance guarantee in ongoing contracts proportionate to progress of work and release of security deposit available with Railways to contractors against bank guarantee. Indian Railways Will Never Be Privatised, Says Piyush Goyal in Lok Sabha.

In reply to a supplementary on death of railways employees due to COVID-19, Goyal said there is a provision for compassionate appointment to one eligible person in the family of the employee who died in the line of duty.

He said the compensation amount has been increased after the implementation of 7th Pay Commission by the government, but added that many states including West Bengal have not implemented this, resulting in railway employees there not getting the increased amount in the event of any mishap. He said Railway Protection Force personnel on duty have been vaccinated and others will also be administered the jabs too.