INS Kavaratti to be Commissioned Into Indian Navy by General MM Naravane at Vishakhapatnam Tomorrow; Know All Details About Anti-Submarine Warfare Stealth Corvette 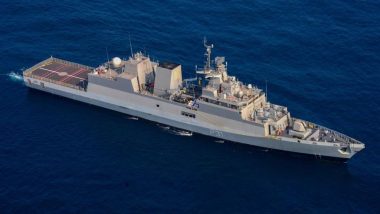 INS Kavaratti will be armed with indigenously developed cutting-edge weapons and sensors, including "a medium-range gun, torpedo tube launchers. It has a top speed of 25 knots. INS Karavatti is 109 metres long and 12.8 metres broad. It is powered by four diesel engines that generate a combined power of 3000 kW. The ship will be commissioned into the Indian Navy in combat-ready format.

(The above story first appeared on LatestLY on Oct 21, 2020 08:25 PM IST. For more news and updates on politics, world, sports, entertainment and lifestyle, log on to our website latestly.com).