A fire broke out in cutlery market area of Mumbai's Masjid Bunder on Sunday. According to reports, the blaze erupted on the first floor of Ismail Building near Jumma Masjid. Five fire engines have reached the spot. Firefighting operations are currently underway. 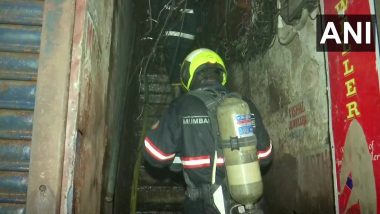 Mumbai, October 4: The fire that broke out in cutlery market area of Mumbai's Masjid Bunder area on Sunday was declared a "level-3 fire" a couple of hours after the blaze was reported. According to reports, the fire had erupted on the first floor of Ismail Building near Jumma Masjid. Nine fire tenders and seven jumbo water tankers were sent to douse off the flames. Firefighting operations were still underway. Mumbai Fire: Blaze Erupts at Crawford Market, 8 Fire Tenders Reach Spot to Control Raging Flames.

No injuries have been reported so far. Panic gripped the area due to the incident. Senior officials have also rushed to the spot. However, the exact cause of the fire is yet to be ascertained. More details are still awaited.

Mumbai: A fire broke out on the 1st floor of Ismail Building near Jumma Masjid in Masjid Bunder's Cutlery market area today. 5 fire engines present at the spot. No injuries reported so far. Operation underway to douse the fire.

It is the second incident of fire in Mumbai within a week. On October 1, a fire broke out in a market near Chembur railway station in Mumbai. Seven to eight shops in the area were gutted in the blaze. However, no casualty was reported due to the fire.

(The above story first appeared on LatestLY on Oct 04, 2020 06:05 PM IST. For more news and updates on politics, world, sports, entertainment and lifestyle, log on to our website latestly.com).