The court observed that the accused had knowingly abandoned her child and was well aware that throwing the girl outside the bathroom window could cause her death. 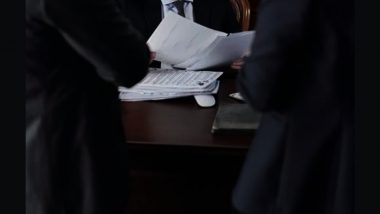 Mumbai, April 22: A session court in Mumbai recently sentenced a 42-year-old woman to life imprisonment for allegedly flinging her premature baby outside the hospital bathroom window thereby causing her death.

While announcing the verdict, the session court stated that the woman pretended that her child was missing which showed that she was in a fit state of mind and not in post-partum depression as it was claimed. Karnataka Shocker: Man Strangles 31-Year-Old Wife to Death After Fight Over Mobile Addiction.

According to a report in the Indian Express, the woman identified as Dipika Parmar was sentenced to life imprisonment by the court on charges of murdering her 1.5-month-old premature daughter at KEM Hospital back in 2010.

The court also stated that four witnesses had deposed before the court that Parmar started shouting that her child was missing from the cot after the incident.

"This piece of evidence, which has gone unchallenged goes to show mental position of the accused, that she was in fit state of her mind and after she abandoned her child after throwing her behind the bathroom, she with an intention to blame some other person started shouting that her one child was missing,” the court said.

It further added, "This itself clearly goes to show that the accused at the relevant time of incident was in fit state of mind, was knowing that what she had done is wrong and therefore with an intention to save herself started shouting that her one child was missing from the cot. Therefore, the accused failed to satisfy by preponderance of probability that at relevant point of time she was suffering from postpartum disorder."

The court observed that the accused had knowingly abandoned her child and was well aware that throwing the girl outside the bathroom window could cause her death. The court also noted that the submitted evidence failed to prove that the woman was undergoing treatment for any mental illness before the incident. Mumbai Rains 2022: Central Railway To Demolish 150-Year-Old British-Era Carnac Bridge Before Monsoon Season.

The court also said that the accused's husband was also examined in order to show her mental state at the time of the incident. Interestingly, the accused's lawyer had also examined the then head of KEM Hospital's Psychiatry department as a defence witness in the case.

The Psychiatry department head had informed the court that she had diagnosed that the woman was suffering from post-partum depression due to her history of failed pregnancies and the ill-health of her premature twins.

(The above story first appeared on LatestLY on Apr 22, 2022 04:56 PM IST. For more news and updates on politics, world, sports, entertainment and lifestyle, log on to our website latestly.com).