Adding to woes of the common man already grappling with rising food prices, fuel prices increased again across the country on Friday. 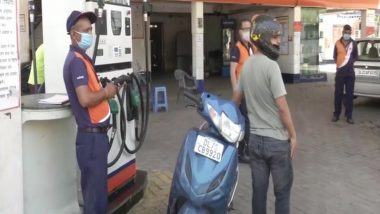 New Delhi, June 18: Adding to woes of the common man already grappling with rising food prices, fuel prices increased again across the country on Friday. Following the fresh rise, petrol and diesel prices are touching all-time highs in many cities. There is an increase of 27 paise in petrol prices in Delhi. Diesel prices have been increased by 28 paise. In Rajasthan's Sri Ganganagar, a lite of petrol now costs Rs 108. Parliamentary Panel Members Question Top Govt Officials over Rising Prices of Petroleum Products.

The price of petrel increased to Rs 96.93 per litre and diesel to Rs 87.69 per litre in Delhi. In Mumbai, where petrol prices crossed Rs 100 mark for the first time ever on May 29, a litre of petrol is being sold for Rs 102.82 per litre on Friday. Diesel prices reached Rs 94.84 a litre, the highest among metros. Petrol prices in two other metros have also reached closer to Rs 100 per litre mark. Centre's Motor Vehicle Act Wont Be Applicable for Old Petrol, Diesel Cars in Delhi, Says Transport Minister Kailash Gahlot.

The price of petrol increased to Rs 104.53 a litre in Bhopal. Diesel prices reached Rs 95.75 per litre in the city. Across the country as well, petrol and diesel prices increased on Wednesday but its retail prices varied depending on the level of local taxes in different states. Meanwhile, crude oil prices fell nearly 2 per cent from their highest level in years on June 17. (With IANS inputs)

(The above story first appeared on LatestLY on Jun 18, 2021 09:36 AM IST. For more news and updates on politics, world, sports, entertainment and lifestyle, log on to our website latestly.com).